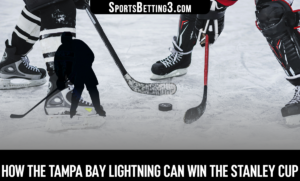 Colorado (-162 to win the Stanley Cup Final)  — with head coach Jared Bednar — is the favorite to win the title while the Lightning is searching for its third consecutive Lord Stanley’s Cup. If Jon Cooper and his squad are successful, they would join the New York Islanders, Montreal Canadiens, and Toronto Maple Leafs with at least three in a row. The Lightning would be remembered as one of the best hockey dynasties.

Heading into Game 1, Colorado is a -148 favorite, but the Avalanche has yet to announce a starting goalie. General manager Joe Sakic — Hall of Famer and two-time Stanley Cup title winner — is “definitely confident” in both goalies. The Avs swept the Edmonton Oilers in the Western Conference Finals to win. So, how can Tampa Bay defeat the Clarence S. Campbell Bowl winners? The x-factor should be the Lightning’s offense.

Colorado has lost just two games this postseason, and in both of the contests, the Avalanche allowed more than three goals. The St. Louis Blues defeated Colorado by the following scores: 4-1 and 5-4 (overtime). Then, in the Edmonton series, the Avalanche looked like juggernauts, as the team impressively won the high-scoring affairs by the scores of 8-6 and 6-5.

Andrei Vasilevskiy will Not Make it Easy on the Avalanche

Andrei Vasilevskiy, a four-time all-star, 2019 Vezina Trophy winner, and 2021 Conn Smythe Trophy winner, will be the Avalanche’s toughest test of the 2022 playoffs. Colorado is 10-0 when allowing three or fewer goals this postseason, but that may change with Vasilevskiy on the other side.

Vasilevskiy’s Lightning has not been able to help him out when he has struggled this postseason. In the Toronto series, Vasilevskiy allowed four or more goals three times, and the team went 0-3. It happened just once more during the rest of the Eastern Conference playoffs: a 6-2 loss at Madison Square Garden.

Tampa Bay is 12-1 this postseason when holding opponents under four goals. This includes the four consecutive victories against the Rangers to finish up the conference finals. In addition, the Lightning will get one of their best players back.

Bet the Lightning — a three-peat could easily be on its way.