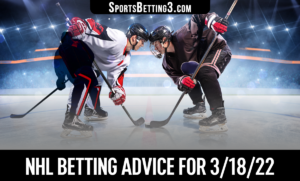 The NHL brings fans a modest six-game slate Friday night. Here we will discuss each game, and give advice on each match up, so let us get right into it!

The Senators play their third game in five days, and the Flyers are on the end of a back-to-back. Philadelphia did not play earlier in the week, but this will be their second game in a three-game span until Sunday.

Usually that does not mean a huge deal, but it could be the deciding edge when picking a favorite as game fatigue factors into the pace of play for both teams.

When two teams that give up a ton of goals but do not score a lot collide the result can be a toss up. Both teams played a lot in previous days, so a low total is the safer bet with a slight edge to the Senators.

Both teams on the ladder half of a back-to-back, so this may be a slower game. Also, with two of the best goalies in the league this should be a low-scoring affair.

Frederick Andersen of the Hurricanes and Vitek Vanecek of the Capitals place in the top for goals against average (GAA). Carolina leads the league in fewest goals against as well.

This is the Capitals third game in four days, and the third meeting against the Hurricanes. Washington took the previous two games, but the Hurricanes could grind out a win here.

Check totals and money line closer to contest lock because this can go either way as well.

Probably one of the more interesting games of the night as Winnipeg battles Boston in Massachusetts.

Both teams come into the game playing well as of late, so this should be a tightly contested game with no clear winner despite the difference in records.

With one of the fewest total goals allowed this season, the Bruins could keep Kyle Connor and the rest of the Jets’ offense in check throughout. But Winnipeg’s goalie Eric Comrie is one of the league leaders for GAA this season.

The lowly Sabres take on the Flames in Calgary. The opponent is not ideal for Buffalo, but it is even worse as Calgary thrives at home.

Johnny Gaudreau puts up incredible points in one of his best seasons of his eight-year career.

A career-year from goalie Jacob Markstrom, who may set a career best in GAA, is another reason for Calgary’s success as well.

With these factors in mind, Buffalo does not stand a good chance against a hot Calgary team. Take the Flames and do not expect the Sabres to cover at all.

The Ducks perform better at home, but it is improbable Anaheim beats Florida. Take the obvious favorite in the Panthers but the Ducks should cover here.

The Avalanche possess a deadly offense led by Nazem Kadri and Mikko Rantanen. Both players score with some of the best as their point totals for the season put them in the league leaders.

Colorado ranks high in the league in goals for with 233, but goalie Pavel Francouz is having another remarkable season. With 2.46 GAA, Francouz is an elite defender against a solid Sharks team.

Take the Avalanche as they should crush the Sharks easily with the spread not being covered.

Sports betting gives fans a different way to enjoy the game, and earn extra money. We at sportsbettin3.com hope to help the fans with our advice to turn a profit and enjoy their favorite sports better!