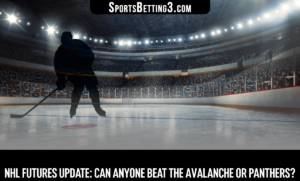 The Colorado Avalanche (+325 Stanley Cup odds) and Florida Panthers (+550) are the favorites to take home Lord Stanley in 2022. It will be the Presidents’ Trophy champion Panthers who have home ice throughout the entire playoffs. With the postseason going through FLA Live Arena, can the Panthers and their league-leading 34-7-0 home record be stopped? For those wondering, the all-time best NHL record for a single season is 36-2-2 (1975-76 Flyers).

The Avalanche is hoping to add to the team trophy case. They were winners of the Stanley Cup in 1996 and 2001. Meanwhile, the Panthers, who started playing hockey in 1993, are searching for their first title in franchise history. Florida led the NHL in goal differential while Colorado fell short of leading the Western Conference in that category. The Calgary Flames (+800; third overall), the second-best team in the Western Conference, were the best in the West in goal differential. Can the Flames — with the tremendous trio of Johnny Gaudreau, Elias Lindholm, and Matthew Tkachuk — put the pressure on the Avalanche in the playoffs, or will it be Colorado who will win the Clarence S. Campbell Bowl?

The Edmonton Oilers (+1700; tied for seventh overall) — with Art Ross Trophy favorite Connor McDavid (-375) and Leon Draisaitl — have been playing tremendous hockey. In addition, the Oilers and Ben Stelter are the feel-good story of the hockey season. It should come down to the Avalanche, Flames, and Oilers in the West. Colorado went a combined 4-1-1 in their six games against Calgary and Edmonton, so the Avalanche seems to be the way to go. In addition, FiveThirtyEight agrees with its NHL predictions: Colorado has a league-best 21 percent chance to lift Lord Stanley — with Florida coming in second at 18 percent.

The powerhouse Eastern Conference may be a gauntlet for Florida. All eight playoff competitors in the East finished with at least 100 points — including the Carolina Hurricanes (+1100). Also, the Atlantic Division was especially top-heavy. There was more than a 30-point difference between the teams in the playoffs and the fifth-place squad in the Atlantic. The Panthers dominated their way to the top of the Atlantic Divison.

Their division foes — Toronto, Tampa Bay, and Boston — are formidable opponents. The Maples Leafs (+1000; fourth overall) and Hart Trophy favorite Auston Matthews (-310) — who leads in the NHL in goals — are very impressive. We also cannot forget about the two-time defending champion Tampa Bay Lightning (+1100), who have been tremendous when under the pressure the last few years. The dark horses are the Bruins (+2000) and Rangers (+1700), so it may be best to avoid betting on Florida to win the East (the Panthers are +225) or the Stanley Cup.