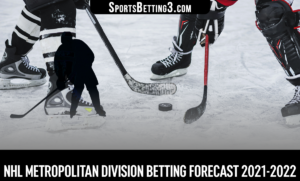 All Metropolitan Division betting odds listed are as of 10/06/2021.

At long last, the 82-game NHL regular season is back, as are the pre-pandemic divisional alignments.

Check out our NHL wagering tutorial

This shift means division rivals will once again only have to play each other two or three times each (instead of eight). These divisional-games-at-a-premium might mean the most in the Metropolitan division, which looks to be the league’s most wide-open race in 2020-21.

Carolina led their division-mates by far in PP% (25.61%, 2nd in the NHL) and PK% (85.23%, 3rd) last season and return a large core of their Central-Division winning squad. The scoring trio of Sebastian Aho, Teuvo Teravainen, and the recently resigned Andrei Svechnikov all return and should do some real damage for a team that has been “a year away” for three seasons now.

Pittsburgh could easily win the division by a mile…or finish fifth or sixth. While there are questions around the health of aging superstars Sidney Crosby (wrist) and Evgeni Malkin (knee), the biggest concern is in between the pipes. Poor goaltending was blamed for the Pens’ first-round playoff exit, yet the front office has decided to make no changes and just hope for the best with Tristan Jerry and backup Casey DeSmith.

The Islanders took the two-time defending champion Lightning to seven games in last year’s finals, but they have just the third-best odds to win the division and sixth-best to win the conference (+1000). This makes them a great value buy, especially considering they spent the offseason loading up their roster with aging, but still-productive veterans like Zdeno Chara and Zach Parise.

Across town, the time may be now or never for the Rangers to make a run. The top points getters from 2020-21–Artemi Panarin, Mika Zibanejad, and Ryan Strome–all return, but the latter two are entering a contract year. Couple that situation with young talent like the Norris Trophy-winning Adam Fox who will be due a big payday in the coming years, and you have a franchise that feels very boom or bust for 2020-21.

Expect Washington‘s odds to fluctuate wildly during the first few weeks of the season as the injury status of Alex Ovechkin becomes clearer. Last year’s East Division champs still have plenty of veteran experience in guys like Nicklas Backstrom and TJ Oshie to pick up the slack and make them a solid dark horse pick, especially if hedged with another bet.

Philadelphia made some moves to try and patch up their league-worst defense by adding defenseman Ryan Ellis from Nashville and goalie Martin Jones from San Jose. But if they can’t find a way to replace long-time assist machine Jackub Voracek (traded to Columbus), expect a middle-of-the-pack finish in this high-scoring division.

Of the eight Metro clubs, New Jersey finished last in PP%, PK%, and second-to-last in goals allowed. While the additions of veteran defenseman Dougie Hamilton and goalie Jonathan Bernier should help improve two of those nubers, the Devils look like they’ll once again be the runt of the New York-area litter.

Columbus is in the middle of a reset after parting ways with longtime coach John Tortorella as well as former captains Seth Jones and Cam Atkinson. The Jackets have plenty of picks in the cupboard to rebuild with, but that future is still a few years away.

Metropolitan Division betting–odds of a team winning the Stanley Cup?

Whoever wins the Metro might not end up being much of a match for the three Atlantic Division teams (Tampa, Boston, Toronto) that are more highly favored to win the conference.

But the divisional title alone could still be worth a play if you believe strongly in one (or two) of these clubs and don’t mind the smaller payouts compared to the Conference championship or Stanley Cup futures races.