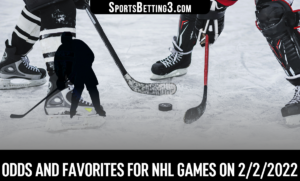 With the last slate of games before the All-Star break, the NHL provided fans with a decent five-game evening.

While the games may not be the most thrilling, there is still an opportunity to make some money and end the first half on a high note. For this, each game will be discussed with the over/under (O/U) and favorites are denoted in parenthesis as well. Let’s get right into it!

To start the evening off is the Kraken against the Islanders, while these teams have similar records there is one glaring difference.

This game sets at an O/U of 5 1/2 with NY at a -180 favorite. This should be interesting because one of the lowest scoring offenses is expected to shoulder most of that scoring bulk. The O/U is a toss up almost, but gut call says under. the -180 favorite, ride with that for sure.

This by far will be the most entertaining matchup on the slate with three of the top five scorers in the league.

Leon Draisaitl, Connor McDavid and Alex Ovechkin all in one game, the goals should be aplenty. While neither team has a glaring advantage, perhaps the biggest is goals allowed, but only seven spots separating the team it is almost negligible.

The O/U is 6 1/2 and the Capitals are slight favorites at -115. Bet the over on this, as three top scorers, two of the better teams in the league, should make for a high-scoring game. In terms of favorite, hard to find fault in rolling with either team.

While records may not indicate but both of these teams are hovering around the playoff picture in their respective divisions. Detroit sits at the No. 5 seed and LA is third in the Pacific Division.

Detroit is bottom-tier in goals allowed, but LA is on a middle-of-the-road offense.

The Kings are modest favorites with -140 and a 5 1/2 total. With both of these teams similar in points, LA 53, Detroit 46, this can go over the indicated total. This game, the over seems more appealing, but the favorite is a clear call riding LA.

A hungry Flames team who is fourth in the Pacific Divison versus a lowly Coyotes team floundering in the Central Division.

Johnny Guadreau and Calgary should easily take this game. Arizona allows the second-most goals in the league and scores the second lowest.

The biggest favorite of the night, the Flames are a -280 with a 5 1/2 O/U. It is easy to get the favorite, and to possibly see the over because Calgary blowing Arizona away, but it could easily be a 3-1 win. Bet whatever is comfortable on the O/U, but the favorite is easily the Flames. If there was any reason to be the Coyotes, low money and hope for a huge upset, but the safe money is with Calgary.

Two teams on opposite ends of the Central Division.

The Wild are scorching with a record of (8-1-1) in the last 10 and on a five-game winning streak.

The differential in goals allowed is noticeable too with Chicago allowing the eighth most and Minnesota at 28th.. There’s also a huge gap in goals for, the Wild sixth most while the Blackhawks 29th most.

Minnesota is highly favored with -160 and the O/U is six. In the past two meetings, the game total surpassed six. Minnesota, with two shootouts and an OT scored 44 goals in 10 games for January. Bet the over and take the Wild.

With a new month comes new opportunities to make extra money. For all the sports betting needs look no further than sportsbetting3 for the inside edge!