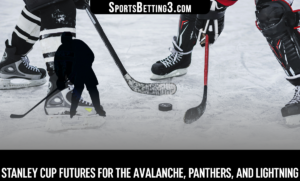 With 76 games played by both the Colorado Avalanche and Florida Panthers, they are deadlocked in the race for the Presidents’ Trophy. Colorado, the team with the most points in the league for the majority of the season, continues to be the Stanley Cup favorite at +325.

Unsurprisingly, the Panthers, also known affably as the “Ice Cats,” are second at +550. They are finding their stride at the right time, as they seemingly cannot be stopped:

11 straight wins for the @FlaPanthers! ? pic.twitter.com/ITG6F9Hm2g

On Tuesday, the Panthers (55-15-6) came back from 1-0 and 2-1 deficits to defeat the New York Islanders (35-31-10) in overtime. At just 26 years old, Aleksander Barkov notched his third career hat trick en route to the 3-2 victory. It is becoming more likely that oddsmakers will be projecting a Stanley Cup Final between the Panthers and Avalanche, who are also 55-15-6.

Will We See Colorado and Florida in the Stanley Cup Final?

Any hockey fan knows that it is very difficult to project the Stanley Cup Final, but it appears we have two juggernauts this season. So, let us take a further look at their odds:


Colorado is just two points away from tying its franchise-record best season in terms of points (2000-01, 118 points). Can the Avalanche duplicate the performance of the 2001 team that won the Stanley Cup? It seems there is a decent chance, but the problem is that there is not much value in taking Colorado at +325.


While Colorado is close to breaking its single-season franchise record for points, the Panthers have already done so. The 2015-16 Panthers previously held the record, but they fell in the first round in 2016. Head coach Andrew Brunette and his offensive powerhouse cannot have that happen this time around.


The two-time defending champion Lightning (46-22-8) was unable to make it three wins in a row on Tuesday, as Tampa Bay fell, 4-3, against the visiting Red Wings. Tampa Bay has had a roller-coaster second half of the season but is tied for fourth in Stanley Cup odds with the Toronto Maple Leafs and Carolina Hurricanes.

Tampa Bay will get the opportunity to take on Florida on Sunday, April 24, so that will be a great game to watch and could be a playoff preview. Lightning head coach Jon Cooper and his team know how to step up their play in the playoffs. If there is one team that brings decent value during the end of the regular season, it is the Lightning at +1000.