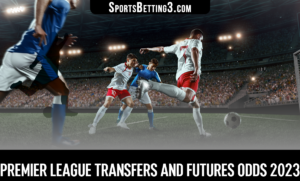 With the World Cup being delayed by FIFA making the bizarre choice to allow Qatar, where it is too hot to play soccer in the summer to host in 2022, the transfer window has kept fans on their toes. In a time when the World Cup would typically be played, people have instead been focused on where players are going. That type of movement will have a heavy impact on Premier League odds.

While there are still a number of players who are deciding where they will go, plenty have already moved on. As those players continue to shift spots, it will be important to try and keep an eye on where they are headed and how it impacts the futures market. Here are how things look now.

The Rich Get Richer

Manchester City have been the kings of the Premiere League over the past five seasons. While Man City has won four of the last five league titles, they needed a miracle to hold onto their one-point margin last season. The Cityzens had to overcome a 2-0 deficit to Aston Villa in the final 20 minutes to score a 3-2 victory and hold off Liverpool for the title.

Manchester City, which are the -162 favorites to repeat, decided to beef up its attack in the offseason. Erling Haaland was Barissa Dortmund’s top scorer last season, scoring 22 goals in 27 Bundesliga matches. It was the second season the Norwegian scored 20 or more goals in league play.

Haaland also stepped up on the big stage, scoring three goals in three Champions League matches. There are big expectations for Haaland, as he is the favorite to lead the league in scoring at +350.

Liverpool, which was just short of the EPL and Champions League crowns last year, is +250 to win the Premiere League. When it comes to find talent, the Reds appeared to turn over every rock they could. Liverpool brought in Benfica’s Darwin Nunez, Fulham’s Fabio Carvalho and Aberdeen’s Calvin Ramsey.

Nunez, who was the most expensive transfer of the trio, showed major progress for Benfica last season. The Urguyan player scored 26 goals in 28 league matches. He also put in six tallies during Champions League player. With his scoring touch, Nunez will make Liverpool even more dangerous and have some leverage against Man City.

Arsenal, which is +6600 to win the league, is hoping adding Vieira will help add some spice to its attack. The Gunners were able to produced 61 goals this season and are hoping Vieira can add more to their attack.

Let’s bring in an American

Leeds United needed a miracle to survive relegation last season. While a stoppage time goal kept the Peacocks in the top division, they knew they would need reinforcements to stay up. What Leeds decided to do was bring in Brenden Aaronson, who is from the United States, to reunite him with former FC Salzburg coach Jesse Marsch.

Aaronson didn’t score much as Salzburg won the Austrian Bundesliga title, but people believe being reunited with his old coach could help. He finished with four goals and four assists in 26 matches last season.

Leeds is has the fifth-highest odds of being relegated at +250. The Peacocks are hoping adding Aaronson and having a full season under Marsch will help them stay away from