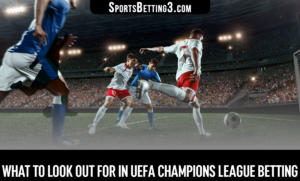 The coverage provided by bookmakers for the UEFA Champions League is generally excellent. It is, of course, one of the world’s foremost club competitions, possibly eclipsing the Premier League and NFL in terms of prestige and global reach.

While football is the world’s most ubiquitous sport, there are certain characteristics particular to the Champions League that should be noted by punters. Certainly, trends can always change. But, you should consider some of the following before you bet on Champions League matches.

Two rounds into the Champions League season, we can see a trend that was also apparent last year. Namely, matches have a propensity towards being high-scoring. In fact, 65% (21 out of 32) matches played so far this season have had three or more goals in the game. That is useful information for a punter aiming at that market. As a comparison, the Premier League has had 57% of matches with three goals or more this season. A difference of 8% might not seem like much, but serious bettors will tell you that 8% could be the difference between a winning and losing bet.

Normally, top betting tipsters would advise you to stay away from betting markets that pertain to individual players. Nobody can tell for certain if a player will score, hit the crossbar or receive the first yellow card – it’s just unquantifiable. However, sometimes exceptions should be made. Lionel Messi and Cristiano Ronaldo have both dominated Champions League goal scoring charts in recent seasons. Ronaldo, however, has some off the field problems this season and has yet to score, whereas Messi has hit the ground running. He has hit five goals in two games so far, an incredible rate of a goal every 36 minutes. That has caused him to be odds on to win the Golden Boot, although he can be found at evens with Betfair and a handful of others. Neymar and Ronaldo are found at 7/1 and 14/1 respectively. Messi also scores first in a disproportionate number of games for Barcelona. To borrow an American phrase – he is clutch.

Trends are sometimes not trends

For years, it was bandied about that the Champions League was so difficult to win because no team had retained the trophy (in its modern format). That changed in 2017 when Real Madrid became the first to win the trophy two years running. For good measure, they added another last season, making four of the last five. Neither is truly a trend; each season is different, and Madrid just happened to be among the best sides. The odds of 10/1 (Bet365) this term for Los Blancos reflects the fact they might struggle this term. Manchester City (9/2), Juventus (6/1) and Barcelona (5/1) look much better placed – forget this history books and back the best team.

Look at what a team wants

Since Manchester City and PSG (a tempting 9/1 for their first Champions League title) got taken over by owners with unlimited resources, the first call was domestic supremacy. In City’s case in particular, the goal was to overhaul Manchester United as the best club in England by consistently winning the Premier League. Those goalposts have been moved, City and PSG’s hierarchy have put the Champions League as a priority, even if that comes at a price of coming up short in their domestic leagues.

Some Important Stats for You to Consider

While betting trends can change over the years, clubs’ results can follow certain patterns over multiple campaigns that can be invaluable for betting. The table below shows a selection of interesting stats from last season’s entire Champions League campaign, which can possibly help you with your betting strategy for this season: