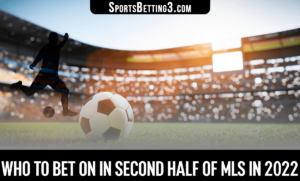 Who to bet on in second half of 2022 MLS season

Having a 34-game season provides plenty of opportunities for teams in Major League Soccer to climb the standings, even with a close start. As the league nears the midway point, it’s a good time to look at where teams are positioned and find value on where they may finish.

There are many teams in MLS that were successful last season and have carried the momentum into this year. Others have just started to find their stride in the past few weeks. Here’s a look at two teams worth betting on in each conference.  Also, for anyone looking to bet on soccer, check out our internal betting guide.

The Seattle Sounders weren’t their usual selves early in the season. In MLS play, the Sounders have been all-or-nothing, producing a 6-1-6 record and sitting seventh in the Western Conference standings. However, Seattle may have been distracted by its pursuit of the CONCACAF Champions League crown.

The Sounders became the first American team to win that title in 2022 by defeating Mexican club UNAM in the final. But Seattle has finally come down from its Champions’ League high and has won four of its past five games in MLS play. When it comes to where the Sounders sit in the current odds, Seattle is +1400 to win the MLS Cup.

While Seattle is still on the line to make the playoffs, the Sounders will likely find a way through. In the team’s 13-year history, Seattle has never missed the MLS’ postseason. The Sounders have plenty of star power as well with Raul Rudidiaz having another strong season for Seattle.

When it comes to the MLS this season, few teams boast the attacking prowess of LAFC. Los Angeles has scored 29 goals, average a little over two goals per game. Thanks to its strong offensive form, LAFC is the favorite to win the MLS Cup at +475. Carlos Vela leads LAFC with six goals and has set up three others.

Ryan Hollingshead is second on the team with four goals. LAFC is 9-2-3 thus far this season and has some breathing room in front of FC Dallas and Real Salt Lake for the top spot. LAFC’s scoring prowess should allow them to take the top spot.

The champs are here

What has made NYCFC, which is +650 to win the MLS Cup, so outstanding is its strong defensive form. NYCFC is backstopped by Sean Johnson, who has recorded eight clean sheets in net so far this season. As a team, NYCFC has only conceded 10 goals all season.

Valentin Castellanos has led the NYCFC attack this season by pocketing a team-high seven goals. While the team has been extremely stingy defensively, their attack hasn’t suffered. NYCFC has scored 25 goals this season.

Can Montreal fix its defense?

CF Montreal has an exciting attack, but it also returns the courtesy by allow opponents to get plenty of good looks at the net as well. So far this season, CF Montreal has produced 28 goals and sits in fourth place in the Eastern Conference.  Djorde Mihailovic leads the team with seven goals.

CF Montreal’s issue so far this season has been on the defensive side. They’ve allowed opponents to score 26 goals. While at +2000, CF Montreal is a significant longshot, they play a fun brand of soccer and will never be accused of being boring.