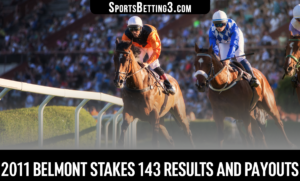 If you like long shot horses, today was your day: Ruler On Ice, at 24-1 odds, pulled off the upset of the season against a stacked Belmont Stakes field comprised of 7 Kentucky Derby starters, Preakness winner Shackleford, and Kentucky Derby winner Animal Kingdom .

The sloppy, muddy track today at Belmont Park added an unexpected element to the race strategies of each horse’s team. Should they push their horse at the beginning for an early lead, avoiding muddy kickback? Or, should they just bide their time in the middle, letting another horse set the pace?

Suffice to say, the only “muddy” element that hindered any horse was Animal Kingdom’s horrific start. A split second after the gates opened, Velazquez and Animal Kingdom seemed to fall off balance, perhaps touching hoofs with another horse. Inevitably, Velazquez fell out of his left stirrup, and eventually regained control with an acrobatic maneuver. His efforts, however, were in vain. Animal Kingdom reached the first turn dead last, dashing the hopes of many who had him pegged for the win. To his credit, he did recover a bit on the backstretch, but he was still too far gone.

The tale at the tape was Ruler On Ice out-kicking a tired Shackleford, followed by Stay Thirsty and Brilliant Speed. These horses were barely on anyone’s radar, save only the most adroit handicappers. It was a surprising end to what was meant to be an Animal Kingdom vs. Shackleford rematch that in reality never really materialized.

Good Luck Horse Betting during the rest of the 2011 Season!