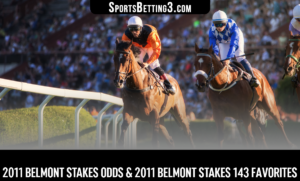 The third and final leg of the 2011 Triple Crown series, The Belmont Stakes, might possibly be the best horse race of the season. Shackleford, the 2011 Preakness Champ, will go head to head against Animal Kingdom, the winner of the 2011 Kentucky Derby. It’s also worth noting that Animal Kingdom just missed Shackleford by a head at the Preakness, which would have put him in contention for the Triple Crown. This will be an awesome rematch of two heavyweight horses battling for best of the best, with a cool $1,000,000 purse up for grabs. All told, we’ve got a great race set for this Saturday, and who knows: maybe a long shot like Monzon or Isn’t He Perfect will steal the show and surprise everyone?

Belmont Stakes futures odds are out and it comes as no surprise that Animal Kingdom is the oddson favorite, currently at +200. He’s followed by Shackleford and Nehro, both at +500. The mid-pack favorites are Mucho Macho Man at +600 and Master of Hounds at +800. Stay Thirsty comprises the initial horses in the “long shot” category at +1500 followed by Brilliant Speed at a close +1600. Total long shots Monzon and Ruler on Ice bring up the rear facing +3500 odds each.

Who’s the value horse this Saturday? Well that really depends who you ask. Joe Q. Public loves Animal Kingdom, and that makes sense given his thrilling performances at the Derby and Preakness earlier this season. Shackleford also comes to mind, but remember that he’s a fast starter and must be able to hold on until the finish. He won the Preakness by getting out front right away and staying there until he crossed the finish line. If Shackleford can’t establish dominance early Animal Kingdom’s monster kick will take him in the final seconds of the race. On the other hand, some feel Nehro and Mucho Macho Man deserve more credit. They might not win the race, but they could very easily take second or third, rounding out an easy exacta or trifecta bet.

Here’s the complete rundown of odds as of the date/time of this post heading into the 2011 Belmont Stakes 143:

Good Luck at the Belmont Stakes this Saturday