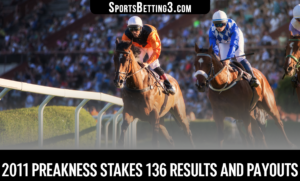 Right from the get-go, Shackleford shot out of the gates to take an early lead as expected. After all, he did the same thing at the Kentucky Derby, and most thought he would fade in the final moments of the race.

Amazingly, Shackleford was able to keep his lightning fast pace in full gear, driving down the homestretch leading by as much as one length at times.

Animal Kingdom, the heavy favorite and 2011 Kentucky Derby champion did his famous last minute charge in attempt to overtake Shackleford. Unfortunately, it was too little, too late. Maybe if Animal Kingdom had better positioning going into the homestretch, he would have been able to catch speedy Shackeford.

Instead, Animal Kingdom almost won, losing to Shackleford by 3/4 of a length, and edging out third place finisher Astrology by a 1/2 length or so. It was an exciting race for horse racing fans, especially those who had anointed Animal Kingdom as this year’s Triple Crown contender. While he did run an incredible race – duplicating his near perfect Kentucky Derby run – he just wasn’t in the right place at the right time during the waning moments of the race.

Good Luck from sportsbetting3.com at the Belmont Stakes in June!