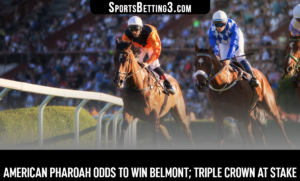 On June 6th in Elmont, NY, American Pharoah will try and become the first horse in 37 years to claim the Triple Crown after winning both the Kentucky Derby and Preakness Stakes just days and weeks earlier.

Odds makers have priced the horse at even money (-100) for bettors backing another win, but anyone on the “NO” side will have to pay -130 – a price that isn”t that heavy, but nonetheless, not very attractive either.

American Pharoah will be the fourteenth horse in the past 36 years to enter into the Belmont Stakes with an opportunity to win the Triple Crown, which would make him the 12th champion in history if he can pull it off, and the first since 1978 when Affirmed accomplished the feat.

One big negative going against American Pharoah is his California residence. Unlike previous Triple Crown winners – like Affirmed, Seattle Slew and Secretariat, who were all based in New York and trained at Belmont Park, gaining familiarity with the track, proven to be a nice advantage as they all handled its sandy surface and expansive turns.

It remains to be seen if that plays a factor in this race, but with the excitement American Pharoah brings after winning the first two legs of the Triple Crown, he might just be the horse to back in this race.