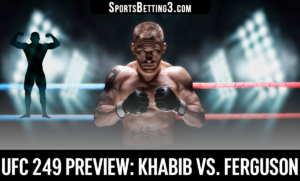 Our drought without live sports continues through this weekend and may last well into April. But by the weekend of April 17 there will at least be a prime UFC fight to watch, and more importantly, to bet on, with UFC 249 featuring Khabib vs. Ferguson. Khabib Nurmagomedov is the champion of the lightweight division, but ranking one spot behind him is Tony Ferguson. Khabib has yet to fight Ferguson, as their long awaited meeting in the octagon has been scheduled and postponed four times in the past.

For Khabib to be considered the pound-for-pound #1 fighter in the UFC rankings, he must take down Tony Ferguson in convincing fashion. At the top of the pound-for-pound rankings is light heavyweight Jon Jones, but Khabib can change the conversation depending on the outcome of UFC 249. Motivation should not be a factor for either of these fighters, and fans should expect an eventful fight that may go the distance.

Looking at these odds, the obvious question that comes to mind is, “can Ferguson beat Khabib?” Of course, it’s possible that Khabib can lose to Ferguson, but how likely is it? More likely than you may think.

Khabib will be able to play his game, but Ferguson is by no means a good matchup for the #1 ranked lightweight. As a champion NCAA wrestler, Ferguson can outmatch Khabib when it comes to fighting in the open. Khabib is a grappler more than a wrestler. He prefers to get his opponents up against the cage. But out in the open, Khabib can be bested. Ferguson is a better striker than Khabib, and also has a reach advantage, as his reach is greater than even McGregor’s.

When it comes to pain tolerance, Ferguson likely has the edge. He can take a beating, and is often bloodied up in his matches. But despite the beating he receives, he has a way of making his opponent’s pay for every blow. Ferguson’s specialty is a ground and pound style of fighting, as he is a world class jiu-jitsu fighter.

One area Tony Ferguson has going against him is his age. There is a significant gap between the 36-year-old Ferguson, and the 31-year-old Khabib and his perfect 28-0 record. However, Tony Ferguson has excellent cardio, and age hasn’t been much of a factor in his 25-3 overall record.

With that said, Ferguson has never faced a fighter like Nurmagomedov. Khabib has won his last 12 fights dating back to 2013, and he’s obviously a heavy favorite for a reason. But favorites don’t always make for strong betting choices, and finding the right time to play a big plus money line can go a long way towards a profit positive year of betting.

If you’ve read everything up until this point, you know where this pick is going. Khabib will more than likely win this fight, but there is enough of a chance that Ferguson can pull off the upset that +230 is too juicy of a line to pass up.