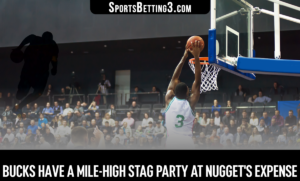 Denver, 3/20/10 – The (mostly justified) knock on the NBA’s Eastern Conference for years has been the generally lower level of competition. Hoop-heads bemoan the fact that “Leastern” Conference teams playing barely .500 ball at season’s end earn playoff spots while “Bestern” Conference teams with 45 or 50 wins to their credit end up aced out. Unfair, many say. Makes for boring playoffs, others carp. Further variations on just can’t hack it, don’t stack up, can’t stand the heat, etc. are then trotted out ad-nauseum.

Maybe the Bucks need to listen up better. Maybe their famously intense coach Mr. Scott Skiles has yelled so much at such high volume their hearing has permanently suffered. On the heels of a double OT road victory Friday night against Sacramento though, Milwaukee downed the Nuggets in Denver 102-97. Perhaps – in lieu of verbal response to Eastern Conference critics – they let their game do the talking.

Milwaukee has surprised this season, overcoming the loss of Michael Redd, a several-times All-Star selection, to boast a 37-30 record. Behind the strong play of rookie point guard Brandon Jennings & Andrew Bogut, the Bucks are now eyeing a playoff spot. Jennings, first NBA player drafted after playing professionally in Europe (after his senior year in high school that is) turned heads when he blew up for 55 points (in just three quarters) back in November. Bogut has endured growing pains since drafted number one overall in ’05 to reach his current puissance in the center’s position, averaging about 16 points, ten boards, & two assists.

Crucial as Bogut & Jennings have been for Milwaukee, their teammates carried the day against Denver. Perhaps wearied by the marathon in Sacramento, (Jennings scored 35 points, Bogut chipped in 21 points & 11 boards) they combined for only 11 points. Acquired mid-season from Chicago, guard John Salmons put in 26 points, including 9-9 from the free-throw line.

On playing 39 minutes the night after clocking 53, Salmons said –we knew we were under a lot of adversity, but you try to forget about that and play hard.”

Swingman Carlos Delfino also helped pick up the slack, for 21 points & seven rebounds. Three other Bucks scored in double figures, the team as whole going 46% from the field.

For their part, Denver got solid contributions, especially from scoring machine Carmelo Anthony & point guard Chauncey Billups, with both notching 29 points. Impressive no? Peel back the onion a layer on those numbers though, & you will see why Milwaukee walked out winners. The usually efficient Anthony (46%) shot a chilly 34% from the field & Billups (43% so far this season) was even colder at 29%. Both made up the bulk of their scoring on the free throw line, where Billups was 17-17 & Anthony went 9-12. As only two other Nuggets – J.R. Smith & Joey Graham – scored in double figures, for 11 & 10 points respectively, you’re left with an impression of two players dominating the ball but doing little to justify it.

Locked in a duel with the Mavericks for second place in the West, (they lead Dallas by only half a game & trail the Lakers by 4.5 games) Denver hoped this home game against a travel-tired team would work out for them. Considering their 30-5 home record this season, that wasn’t an outlandish assumption. Wise in defeat, Billups may have put his finger on Milwaukee’s edge – they reflect the character of a coach renowned for his hard-nosed style:

“I mean, that’s one of the worst teams you can play in the regular season because he has them playing hard, diving on loose balls, it doesn’t matter if they played (the night) before or not. In my times playing against his teams, I just respect him a lot because he just gets his teams playing hard every single night.”