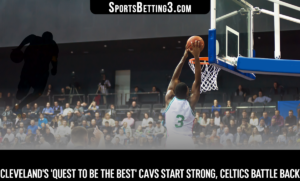 King James seemed in fine form, pouring in 35 points & seven rebounds/assists, to key a Cavs attack that dispatched Boston 101-93. Often streaky Mo Williams lent a hand for 20 points, though the usually high-scoring Antawn Jamison managed only seven. The Celtics got a supreme performance from Rajon Rondo (27/6/12) & a respectable one from Kevin Garnett (18/10/4, with two steals & three blocks thrown in) but their bench failed to contribute to the degree Cleveland’s did.

Game 2 saw Boston take revenge in a 104-86 victory, ending the evening with six players scoring double figures. Though Rondo’s 13 points were second lowest in the group, his 19 assists (tying a franchise playoff record, no mean feat considering the franchise) more than made up for it. LeBron scored 24, seeming merely human on a night where he was awarded his second consecutive NBA MVP award. Sub-par supporting play from the other Cavaliers- only Jamison (16 points) & second unit forward J.J. Hickson (13 points) joined James in double figures – sealed Cleveland’s fate.

The series is renewed Friday in Boston, where the Celtics hope to capitalize on game two’s positive momentum. The Cavs – having lost by a mile on their home floor – watched game tape in practice Tuesday & concentrated on devising a way to slow Rondo down. LeBron remained under wraps, presumably getting treatment for his elbow – now described as sprained with an accompanying bone bruise. Cavaliers forward Anderson Varejao is also amongst the walking wounded, suffering from back spasms that caused him to miss game 2’s entire fourth quarter.

Physically weary, Cleveland can expect Boston to ratchet up the toughness on their home floor. Mentally, the Cavs could be weighed down as well. Just as military strategists say it can be more valuable to wound an enemy soldier (forcing comrades to respond & decreasing their fighting ability accordingly) than to kill one, LeBron’s lingering injury is probably filling the Cavalier troops with existential dread & self-doubt. If the Celtics can exploit this opening, Cleveland’s championship quest may end a lot sooner than many thought possible.