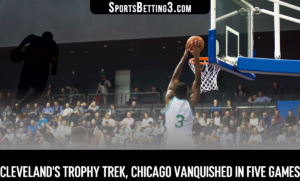 Part II – For the Bulls, it had become a do or die. For Cleveland, a chance to extinguish Chicago’s fire & put a memo out to the League re: We Will Not Be Denied.

In winning game three, the Bulls got very lucky. By two points, they avoided plummeting into rather cursed NBA history – no team has ever come back down 3-0 & won a playoff series. Suiting up 4/25 then, Chicago may have felt the chokehold relax. Their fans providing aid & comfort, perhaps they were feeling it enough to come out on top & head back to Cleveland, all tied up.

However, the Fates were not to smile upon Chicago’s endeavor. LeBron fully realized the triple-double he’d been scratching at the previous game, (37, 12, & 11 – meoww!) and behind 24 points of help from Antawn Jamison, the Cavs defeated Chicago handily 121-98. While strong efforts from center Joakim Noah (21 points, 20 boards) & Rose (21 points, three rebounds, & five assists) were nice, the Bulls needed more than “nice”. The odds they could become only the ninth team in history to make it out of a 3-1 hole were slim at best.

Game 5 came a Tuesday night, 4/27, in Cleveland. As often happens in these situations, the pressure pendulum swung back to the Cavs, who needed to show the ability to put Chicago down for the count. All the Bulls had to do was live to fight another day – and they nearly did. While Cleveland won, they did so just barely – 96-94, and not without a measure of trouble. LBJ knocked on the triple-double door again, recording 19 points, 10 boards, & 9 assists, but in the game’s waning moments appeared painful in his right elbow. Though the Bulls got 31 points from Rose & 26 from forward Luol Deng, for Cavs fans, the possibility of injury to their team’s lynchpin was more frightening than anything Chicago mustered. Post-game, James took pains to assuage the concerns of the faithful:

“It bothers me because I don’t know what it is. Hopefully it doesn’t continue to bother me. But I’m not concerned. Cleveland fans have nothing to worry about. They have no reason to panic. I don’t think it’s that serious.”

Time will tell if LeBron’s words ring true. Chicago has nothing but time, best spent in reflection on their future. Eliminated by the Celtics in the first round last season & now by Cleveland, they reside on a plateau where further improvement requires one or more radical changes. The first change came Monday, when coach Vinnie Del Negro – who had led Chicago to both post-season appearances – was pink-slipped. Del Negro spent most of his season on the hot seat & the dismissal wasn’t shocking, especially after a disagreement with John Paxson (Bulls executive VP for basketball operations) turned into a physical altercation late in March.

Considering this summer’s free agent market will be amongst the richest in years – LeBron, Miami star Dwayne Wade, the Raptor’s Chris Bosh, & other marquee names are all available – the Bulls plan, expressed mathematically, reads thusly:

Whether this equation proofs out given the variables depends largely on Chicago’s ability to make that hardest leap of all – going from merely “good” to “great” – a leap few have made successfully before.