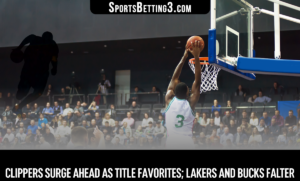 Sitting down in front of the TV to watch the NBA Playoffs felt fantastic. What felt odd is the LeBron James and Anthony Davis led Lakers looking slow and unable to hit open shots. After a frustrating 100-93 loss to Portland, LeBron said, “I continue to say this is different. We’re in a bubble with no fans. But as far as me being locked in on the gameplan, that doesn’t change. Not one bit.”

The Los Angeles Clippers have sat behind the Lakers in the title odds for the majority of the season. However, readers here will be happy to know that we have been screaming to the high heavens about the Lakers not being, “mentally ready” for the playoffs. The Clippers have a far better roster and extremely fresh legs. Kawhi Leonard appears poised to win his third NBA title with three different teams. Likewise, he could be the first NBA player to win the Finals MVP with three different teams.

Kawhi Leonard and the Clippers appear to be locked in for a title run. However, the Lakers do not appear to have found their Mojo. Now, with an 8 game preseason complete and a serious playoff foe in front of them, the time to get locked in is now. Their path to the finals of Portland, Houston/OKC, and the Clippers is as difficult as they come. Is it time to push the panic button with the Clippers looking as strong as ever?

Top Seeds in Each Conference Have Not Looked Like Championship Teams

Fading the Bucks has been talked about for several weeks since they were outlasted by the Brooklyn Nets as a -1450 favorite. Fast forward two weeks to a game that actually matters, the Bucks are still struggling with a game 1 loss to the Orlando Magic. This is also an Orlando Magic team that is without Jonathan Issac who tore his ACL. The Bucks (-11) lost badly to the Magic and did not lead after any quarter.

The strategy is pretty simple when playing Milwaukee, stack the paint, and do not let Giannis Anteokounmpo control the game. Khris Middleton scored just 14 points as their second-best player leading to further questions about whether this team is built to win now. The Bucks will surely come out of this Magic series with ease but Miami is a real test next round and whether it is Toronto or Boston afterward, there will be an upset advisory posted. With Brad Stevens and Nick Nurse approaching a fascinating stylistic matchup, they are assuredly preparing their best gameplans for Giannis.

Clippers Have Been the Best Team Since Day 1

The Western Conference is very simple to read at this point. Can anyone imagine if the Lakers were matched up with the Mavericks right now? They would not just be down 1 game but a legitimate case can be made for the Mavericks being a better team. The Clippers will make easy work of the Mavericks and the next round does not appear to be much more difficult for them. The Jazz and Nuggets do not pose a real threat to the Clippers. The only thing to do from here is to maintain health heading into the Western Conference Finals matchup with (presumably) the Lakers.

As the Lakers appear to regress it is important to realize that the Clippers have looked very good against the Lakers when they have played. The Lakers did win the matchup in the NBA Bubble which is noteworthy. That is the only ray of sunshine for the Lakers who have looked atrocious without Avery Bradley and Rajon Rondo. With or without that victory, the LA Clippers have continued to win the “Battle for LA” since the beginning of the season.