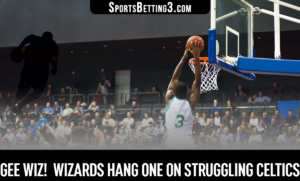 Boston, 4/9/10 – For the Wizards & Celtics fan alike, frustration reigned at the conclusion of Friday night’s contest.

Despite being happy about a 106-96 victory, the Wizards fan wonders “Hey, if you can beat a play-offs bound team, why’dja put us through this season of Hell?”

Despite being happy about the C’s making the play-offs, the Celtics fan wonders “Hey, if you could win a championship not two years ago, why’s this season feel like the beginning of the end?”

As the great American philosopher “Little Carmine” Lupertazzi would tell both teams, “You’re at the precipice of an enormous crossroad.” Washington traded away franchise mainstays (and All-Stars) Caron Butler & Antwan Jamison in February, breaking up a team that began circling the drain around Christmas when Gilbert Arenas’s monumentally stupid “prank with handguns” exploded onto the national media scene.

Meanwhile in Beantown, the time borrowed when Boston teamed the 30+ duo of Kevin Garnett & Ray Allen with Paul Pierce to deliver a 17th NBA title is running out. As their ability to contend for additional rings has diminished amidst the nagging injuries their vets have accumulated, fans wonder if this is the beginning of a long trip back to a wilderness of losing seasons.

I have a love/hate relationship with Washington, & the win over Boston neatly satisfies the requirements. I love seeing recently signed point guard Shaun Livingston ring up 25 points, six boards, & seven assists, because a few short years ago the former prodigy’s career was on life support. I hate that Andray Blatche has taken five years to morph into a Lennie Small-type figure, whose strengths (31 points & 10 rebounds against Boston, nearly 19 & 7 per game since February) are balanced by severe mental & maturity limitations – feuding with his head coach, complaints about being underpaid, & multiple brushes with the law. I love the patient leadership of Flip Saunders, upbeat despite his Romper Room-esque existence. Finally, I hate that this drama will drag on into next season, when Arenas will return from suspension.

For Boston, I offer only a simple shrug of the shoulders conveying my deepest “I don’t know what you realistically expected here, guys” feelings. Keep in mind, for all the praise Celtics GM Danny Ainge garnered when remaking the team around the “Big 3”, he also mortgaged their future. The rapidly graying Pierce, Allen, & Garnett are all scoring the lowest rates per game since their rookie years. They’re also owed big dollars for at least the next two seasons, strangling out Boston’s ability to profit from the upcoming free agent bonanza. In search of consolation, C’s fan should look to Rajon Rondo, who will be the best player on this team for years to come. He led all Celtic scorers against Washington, putting in 17 points (54% from the field but only 50% from the line) to compliment his 12 assists. Other than Rondo, big-man Kendrick Perkins continues to improve, despite his rather lamentable (10 points/7 boards) night against the Wiz.

Washington’s future is too screwy for anyone to claim they can make accurate predictions. They’ll score a nice draft pick, but given the franchise’s draft history (Kwame Brown anyone?) that is no guarantee of any coming salvation. Re: the Celtics, I propose a heart-wrenching, but ultimately necessary solution. (link it!) If any of the Big 3’s contracts can be moved, move them. Building around Rondo, Perkins, & do it quick enough that they don’t get the itch to leave amidst losing seasons. The fans may howl, but they had to know this day would come.