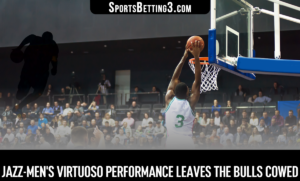 Chicago, 3/9/10 – To the untrained ear, jazz music can seem a complicated endeavor. Highly skilled players improvising melodies, harmonies or time signatures at will. If they’re doing it right, you’ll never hear the same piece played the same way twice. Careful listening reveals a simple truth though – respect for the rhythm, as the elemental foundation underpinning each unique performance.

To the untrained eye, Jazz basketball can seem a boring affair. Head coach Jerry Sloan has presided for almost 21 years now, an eon compared to the eye-blink tenures most NBA head coaches experience. The players have changed, the uniforms have changed, but what the Jazz bring to the game – pick & roll offense and tough defensive – has remained the same. That framework however, provides for unlimited variation.

Discovered at the heart of the matter is the same basic principle – unite the players & you unlock their talent. It doesn’t always work, but when it does, the results are extraordinary. Just ask Chicago, who found themselves on the receiving end of a 132-108 Utah victory Tuesday night.

For several seasons now, Utah’s Deron Williams has been discussed as a top point guard currently playing. Williams showed exactly why he’s in that conversation, putting forth 28 points on frankly ridiculous 11 of 15 shooting. Further proving his case with 17 assists to one measly turnover, D-Will quarterbacked the Jazz to a win that boasted highs in points, assists, & three-point percentage by any Bulls opponent this season. Swingman C.J. Miles was the primary beneficiary of William’s generosity, considering he came in averaging 8.9 points & went out with 26 points. Like a good teammate, he gave credit where it was due:

“A couple of times, I was just standing,” Miles said. “But most of the time, I was sliding up and down. They have to pay attention to Deron when he’s penetrating. It’s Deron Williams.”

To Miles’s credit though, he shot the lights out. Six of seven from beyond the arc, nine of twelve overall – and all done in just 19 short minutes. Efficiency like that is why the Jazz have chalked up nine road wins in their last eleven games and are a single win behind Denver to lead the Northwestern Division.

Since his rookie season (last year actually) Chicago’s Derrick Rose has been tipped as the next top point guard in the NBA. Rose showed why in the Bull’s first round playoff series against the Celtics last year, but has struggled this season. Perhaps carrying more of the scoring load after Ben Gordon’s departure or increased defensive attention by opponents has limited his effectiveness, but against the Jazz, he earned Williams’s respect.

“I always have fun competing against the best,” Williams said. “That’s my job and I enjoy it.”

Finishing the contest with 25 points and tying his career high of 13 assists, Rose also managed four rebounds. Expressing mutual respect for Williams, Rose made certain future match-ups between the two will be worth watching:

“He’s always someone I looked up to and I thought he played real well tonight,” Rose said.

Their recent surge in the Western Conference rankings in mind, the Jazz picked the right time to being peaking. As the champion Lakers falter & the revamped Maverick’s double-digits win streak draws attention, Utah could emerge as the team nobody wants to face for five or seven games. Long, strong, defensively tough, & “in tune”, the Jazz could be making their beautiful music deep into the playoffs.