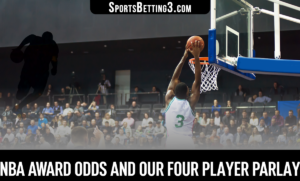 With three weeks left in the NBA season, the race for NBA awards is heating up. For the Association, injuries almost always play a role in who wins what award. In this wildly chaotic year, that holds especially true. Just a month or so ago, Lebron James looked like the betting front runner for NBA MVP at +250. Today, he’s basically out of the running, suffering a high ankle sprain which dropped him to +4500. NBA awards don’t always offer a lot of value but thanks to parlays, there are some intriguing odds on the boards. Here’s our NBA awards breakdown from MVP to Most Improved Player.

A Three Horse Race For MVP

As of now, Nikola Jokic (-360) holds a slim lead over Joel Embiid (+340) with Steph Curry (+1700) making a late charge on the outside. Despite Curry shooting flames from just every orifice for a month, it’s highly unlikely that NBA voters will hand the sharpshooter his 3rd MVP award for his career.

It’s really down to the two big men vying for their first such accolade. The loss of Jamal Murray means everything goes through the Joker, pumping his stats to crazy levels. He’s averaging 26.4 points, 11.1 rebounds, and 8.7 assists per game while shooting 41% from beyond the arc. Embiid has also tallied some gaudy numbers but missed 18 games to a hamstring. Jokic’s odds aren’t great but consider parlaying him with a few other NBA award locks.

This award is beyond a lock. If Julius Randle doesn’t win it after going from a slightly above average frontcourt player to an all star, they should abolish the award. He’s only -250 which is decent enough odds to throw him in a parlay with a few other bets to stack your dollars. Combining Randle, Jokic, and our next category, which also has a rock solid winner, could build a nice bank to use come playoff time.

Incredibly, Jordan Clarkson of the Utah Jazz stands as even more of a favorite than Randle at -1000. However, just like Randle, it’s hard to imagine anyone else even in the conversation. The next best odds for sixth man come from Joe Ingles who is a teammate of Clarkson. NBA voters also like to reward winning and the Jazz far and away own the best record in the league. Parlaying Jokic, Randle, and Clarkson nets you nearly 2-1 odds. If you’re feeling bold you can always throw in our next category as well.

Defensive Player Of The Year

If you are going for broke with a four ward parlay, this could be the one that trips you up. Currently, Rudy Gobert of the Utah Jazz remains the favorite at -335. He’s already won the award twice and the Jazz look like shoe-ins to win sixth man and most likely coach of the year. Typically, voters don’t stack all the awards on one team if they can avoid it. Simmons is next on the list at +230 and began the year collecting headlines about his other worldly defense. Adding Simmons to our all NBA awards parlay boosts it to better than 5-1 but adds a major risk. Doing two versions of the bet, one with Simmons and one without seems like a sage play.