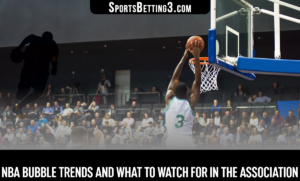 Since the NBA’s glorious return to action, betting on the Association has been turned on its head. Last-minute injury scratches and historic favorites losing outright have shaken NBA wagering. However, thanks to an unprecedented restart within a bubble, traditional Vegas metrics that used to handicap lines don’t account for everything within this bizarre world.

As Brad Feinberg, a professional sports bettor and expert for NBC Sports Philadelphia, says “This is probably the most random experience we’re going to get ever in sports history. Pre-pandemic, NBA closing lines were really sharp and hard to beat. Right now, these closing lines, for the first time ever, they may not be efficient. We’re rating the Bucks and Clippers a certain way based on their record. But some of these teams are going to be better or worse. Everyone’s going into it a little blind.”

Keep A Keen Eye For Injuries

One sure-fire way to gain an edge while betting on the bubble league is watching closely for last-minute injury updates. For instance, Feinberg made hay betting against the Utah Jazz. The Jazz lost Bojan Bogdonavi? to wrist surgery in May and battled chemistry issues stemming from the Donovan Mitchell and Rudy Gobert fall out. Despite those red flags, the Jazz opened as favorites.

These games are coming fast and furious so if you see some breaking news regarding a team or player, check the line. Feinberg’s advice, “Bet that game before they can move it because they’re managing a hundred things at once, not just the NBA. They’re looking at every MLB game, they’re looking at every hockey game. It’s hard for them to really be fast. I’m looking for little edges like that.”

Some teams need a home crowd to inspire them, other teams feed off the silencing opposing arenas. Obviously, in the bubble, there’s essentially no distinction between home and road. However, as one coach put it, “It’s like a 112-day road trip.” With that in mind, it’s likely helpful to look at who handled adverse conditions best.

Kyle Lowry and company look fired up despite being locked into the two seed. Toronto plays until the bitter end which is probably why they are the #1 public bet so far. Eric Bledsoe hasn’t played despite not having an injury. His status looms large for the Milwaukee Bucks’ title run.

For now, the Raptors remain +2200 to win the title and +700 to make the finals. If the Bucks don’t get their starting point guard back, the Raptors may become the odds on favorite in the East.