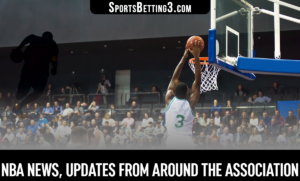 With just a week to go before the NBA season tips off, the Association continues to drop newsworthy stories with far-reaching implications. After years of hearing how Giannis Antetokounmpo would flee small market Milwaukee for greener pastures, Bucks fans can rejoice. The two-time reigning MVP inked a historic 5 year, $228 million deal, making him the highest-paid player in NBA history! Of course, Giannis wasn’t the only one making noise. Here’s our round-up for what’s going on in the NBA.

After years of Lebron James, Kawhi Leonard, and Kevin Durant changing teams to their heart’s content, Giannis Antetokounmpo bucked the trend. In fairness, the Greek Freak has always marched to the beat of his own drum.

In 2018, he declined to work out with fellow headliners James Harden, Kevin Durant, and James Harden in the offseason. As he saw it, why join them when you’re trying to beat them? All of Milwaukee celebrated when Giannis tweeted, “This is my home, this is my city.. I’m blessed to be able to be a part of the Milwaukee Bucks for the next 5 years. Let’s make these years count. The show goes on, let’s get it.”

Houston We Have A Problem

Naturally, not all the news in the NBA reads like sunshine and rainbows. In Houston, the James Harden drama continues. After flirting with a breach of contract by partying with rapper Lil Baby in Atlanta as opposed to reporting for training camp, Harden finally showed up. Houston head coach, Stephen Silas, told reporters the Beard would play 20 minutes in their preseason game Tuesday.

All the uncertainty swirls as Adrian Wojnarowski reported that Harden remains “unmoved” by Houston’s moves and still wants out of Houston. Houston has discussed Harden trades with both Brooklyn, Harden’s preferred destination, and Philadelphia. Unfortunately, the Nets package equates to a poo poo platter and Philadelphia won’t commit to trading all-star Ben Simmons. For now, the Mexican standoff continues but most experts predict Harden will be on the move one way or another before the March trade deadline.

To Fan Or Not To Fan

As the coronavirus stretches into eternity, NBA teams are forced to make hard decisions involving in-person attendance. Obviously, for certain teams like those located in California the decision was taken out of their hands. On the flip side, Orlando announced they would host 4,000 socially distanced spectators while Utah looks to do the same with 1,500 people. Cleveland is the only other team, as of now, set to allow onlookers.

Most of the teams have yet to announce their plans. Clearly, they are hoping for an influx of patrons once the vaccine becomes widely available but as with everything in this pandemic world, it’s up in the air.