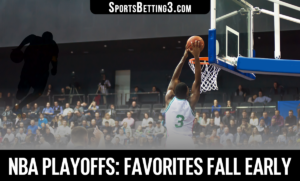 The NBA playoff bubble took center stage this week for 16 teams under unprecedented conditions and the unexpected ensued. Through the first few slates of games, the weirdness of bubble conditions have undoubtedly played a role in the results thus far. No home-court advantage helped level the playing field for two eight seeds, the Orlando Magic and Portland Trail Blazers. However, the favorites still went 7-2 SU and 6-3 ATS. Here’s a rundown of what to watch for moving forward.

Historic Upsets In The Making?

Thanks to the best of seven format and gravity of superstars, the NBA rarely sees upsets in round one. Typically, the long season also separates teams into dependable tiers. Obviously, this year was different. Portland, thanks to numerous injuries and a shortened season, ended up as an unusually strong 8 seed. Orlando, on the other hand, profiles like a team that Milwaukee should destroy, especially without Jonathon Isaac and an iffy Aaron Gordon.

Nevertheless, Orlando shot the lights out and the Bucks came out flat. Ultimately, Milwaukee should turn this around rather easily. Remember, they lost the first game last year to the Celtics in round two before winning the next four games.

The Lakers, on the other hand, have much more to worry about. It starts with their struggles from the 3 point line. Through 9 games in the bubble, they are an atrocious 28.6% from beyond. It also hurts that they are playing the hottest shooting team, Portland, at 42.2% from three. We’ve mentioned this a few times, but the absence of Avery Bradley against Portland’s two speedy guards has really hurt Los Angeles.

Not having Rajon Rondo has also highlighted their lack of playmaking outside of Lebron James. When the King sits, the Lakers struggle to generate consistent offense. It’s a long series; chances are LA will make the proper adjustments, forcing players not named Lillard or McCollum to beat them. Regardless, this looks like the series offering the best betting value thanks to the Laker’s popularity and the matchup problems Portland poses.

The NBA playoffs ebbs and flows. Just because one team dominated another doesn’t necessarily mean that’s how the whole series will play out. Oklahoma City looked terrible against Westbrook-less Houston and Dallas failed to cover against the L.A Clippers. OKC couldn’t have played worse and Dallas lost Porzingas early in the 3rd thanks to an ejection. Look for both teams to bounce back ATS in their respective game 2’s.