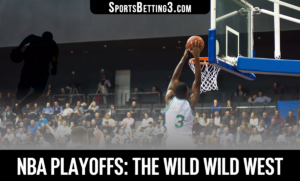 The NBA playoffs have brought a much-needed, joyous, and unpredictable distraction to our lives unless, of course, you’re talking about the Eastern Conference. The first round in the East offered three sweeps and an almost assured gentlemen sweep once play resumes due to a civil rights boycott by the players.

Thankfully, the Western conference has not disappointed, providing offense fireworks and contentious competition. Here are how the Western Conference series stack up.

After a strong opening game against the heavily favored Lakers, Portland has physically dominated the last three games. Without Zach Collins, Anthony Davis and the Laker big men have punished Portland despite the Blazers going twin towers with Nurkic and Whiteside. It’s difficult to see the underdog Blazers winning another game as the Lakers appear to have figured them out.

One of three barn burner series out West, the Dallas Mavericks continue to impress despite playing a number of the games without their second-best player, Kristaps Porzingas. Wonderboy Luka Doncic has played magnificently: including a 30-foot game-winner that capped off a 40 point triple-double, becoming the youngest player to ever tally such gaudy numbers.

Unfortunately, Porzingas remains doubtful for game 6 and the Clippers can control everyone but the Slovenian sensation. Every game but the opener went over, even as Las Vegas continued to push up the line. Look for the Clippers to close it out.

Without two-thirds of their guards, the Nuggets have been forced to play jumbo-sized line ups, many times with three power forwards. Lacking Gary Harris’ defensive speed and timely scoring of Will Barton, everything has fallen on the shoulders of Jamal Murray and Nicola Jokic.

Harris was listed as questionable before the last game but hasn’t played 5-5 since March 11th. It’s very unlikely that he’ll be able to make an impact should he return. Barton left the bubble a week ago and will not return.

Under the circumstances, Murray has to play up the level of the last two games which netted him 50 and 42 respectively. The Nuggets are living on a knife’s edge and Utah is humming on all cylinders since the return of Mike Conley. Look for Utah to close it out and the game to go over.

The most back and forth series of round one has featured two relatively easy wins for the Rockets and two nail biters for the Thunder. That fits for the Thunder who have won 16 games this year after trailing going into the fourth quarter. No other team has won more than 8 games in the same situation.

Ultimately, it comes down to the 3 point shooting of Houston against the balanced attack of Oklahoma City. The game delay does give Houston slightly more time to get Russell Westbrook back in the lineup. His status will go a long way in deciding this series.