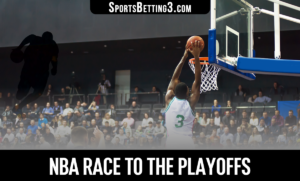 With just over two weeks left in the NBA season, a wide array of NBA races are coming down to a photo finish. From playoff sprints to divisional crowns, the discerning NBA gambler can savor a veritable smorgasbord of wagering options to choose from. As the stakes rise, so too, does the level of play. This past weekend saw a 60 point explosion from Jayson Tatum and a barn burner between the Brooklyn Nets and Milwaukee Bucks. Here’s our final regular-season roundup for the 2021 NBA season.

Of all the divisional dashes, the easiest to pick pits the two leading Eastern Conference leaders. Currently, the Philadelphia 76ers own a 1.5 game lead over the Brooklyn Nets. Philly is riding a 5 game winning streak while Brooklyn, losers of three in a row, have hit their first rough waters of the season.

James Harden’s return from a hamstring injury remains in question. Brooklyn head coach Steve Nash didn’t sound optimistic about having their squad healthy and whole, “We’re probably not going to have the luxury of a run of games with everyone available and we may not start the playoffs.” Brooklyn with their all star cast will prioritize health over winning the division. Philly’s remaining schedule also looks like a cake walk with two TBA games against Orlando. -1000 isn’t good value alone but the 76ers offer a solid anchor for your parlays’ pleasure.

The Atlanta Hawks hold a tenuous single-game lead over the Miami Heat with 6 games to go. Comparing their remaining schedules, Atlanta’s road looks a bit smoother with two games against teams already planning their summer vacations. This one looks more like a coin flip and the odds reflect that. In the end, you have to like Atlanta’s chances with a slight lead and fewer playoff contenders left on their schedule.

Odds To Make The Playoffs

With the new play-in games, making the playoffs takes a new meaning. Fringe teams must win their play-in games and get slotted into the field of 16. Essentially you are betting on who will come out victorious amongst the Golden State Warriors (even), San Antonio Spurs (+425), and Memphis Grizzlies (+155) in the West. In the East, it’s between the Charlotte Hornets (+155), Indiana Pacers (+150), and Washington Wizards(+155). You can also throw in the Toronto Raptors (+1500) if you’re into long shots.

In the West, the Warriors are playing the best and it’s difficult to bet against their playoff pedigree. It never hurts to have the two-time MVP and current human torch on your side either. In the East, the Pacers’ resumé lacks any impressive wins over the last month while Russell Westbrook has kicked his prolific engine into high gear. Look for the Wizards to sneak into the playoffs.