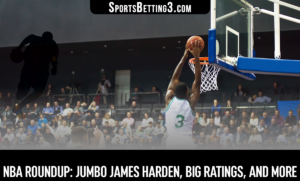 As we finally put the year from hell in our rearview mirror, the NBA is in full holiday swing and the world just might be righting itself. In the NBA, the James Harden saga continues, ratings are up, and some record-setting butt whuppings are handed out in the holiday season. Despite the shortest off-season in NBA history, the games have been impressive, particularly in the ultra-competitive western conference. Here’s everything you need to know about the Association.

Harden’s off-season exploits have been well documented from Atlanta strip clubs to Las Vegas all-nighters. By the looks of Harden’s physique, all that late-night jubilation has added some considerable girth to a man that already stretched the definition of thicc. Nevertheless, Harden’s holiday poundage hasn’t stopped him from putting up big numbers. In two games, the Beard has racked up 78 points and 25 assists.

Those gaudy numbers haven’t led to wins and the Rockets remain the only victory-less team in the West. Initially, Harden’s preferred destinations were limited to Brooklyn and Philadelphia. Unfortunately, for Harden, there doesn’t appear to be any traction between Brooklyn and Houston. ESPN’s Zach Lowe recently spoke to that, “It’s unclear to me, frankly, if those teams have had anything resembling a serious conversation about James Harden.”

Spencer Dinwiddie’s season-ending ACL injury further cramps Brooklyn’s ability to trade for the disgruntled superstar. On the other hand, Harden did add Boston and Portland to teams he would gladly be traded to, for whatever that’s worth.

Big Ratings For The NBA

After the NBA’s lackluster pandemic ratings, including the fewest viewers for a Finals since 1994, the NBA got a much needed Christmas present. The Association’s opening week took in an average of 3.4 million viewers, making it the most-watched opening week since 2012. The Lebron Luka showdown also roped in 7 million people but still fell short of last year’s all L.A clash of 8.8 million.

It’s more impressive that the NBA enjoyed such receptive viewership despite some record-setting drubbings. The day after Christmas, the Dallas Mavericks led by a score of 77-27 at halftime over the vaunted L.A Clippers! That was the largest halftime deceit in NBA history and the final score didn’t get much better.

Normally, such shellackings come once in a blue moon. However, just a couple of days later, the Milwaukee Bucks hammered the Miami Heat 144-97. The Bucks also made a record-setting 29 three-pointers in the process. To add insult to injury, 12 different Bucks players made a 3, which was also a record. The lopsided victories are extra impressive as they came against championship-caliber teams. Bettors may want to lay some money against whomever Miami plays next, as hell has no fury like an embarrassed Pat Riley.