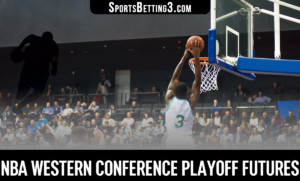 With college basketball in the rearview, the NBA takes center stage in the sports landscape. In a year marked by injuries and Covid protocols, predicting the NBA champion looks more difficult than ever. However, that uncertainty also creates some opportunities for the savvy NBA gambler. In the East three true contenders have risen to the top: the Brooklyn Nets, Philadelphia 76ers, and Milwaukee Bucks. The Miami Heat also lurk in their favored dark horse position. The West has become far more complicated, thanks to injury woes for the Los Angeles Lakers and the recent acquisitions of the Denver Nuggets. Here are some NBA futures to consider.

Without the dynamic duo of Lebron James and Anthony Davis, the toast of Tinseltown has fallen hard. Despite being currently slotted in the fifth seed, the Lakers still remain +300 behind only Brooklyn at +250. There’s mild optimism that Davis will return to the lineup at the end of L.A’s five-game East Coast road trip.

Nevertheless, achilles injuries rightfully scare teams and players like the boogie man. There’s no guarantee that he’ll be the one man defensive wrecking crew and match up nightmare right away. Lebron likely won’t return until the end of the month as high ankle sprains often bring their own ambiguities. Repeating in the NBA takes a world-class team along with a healthy portion of luck. It doesn’t look like L.A’s year, which opens the door for other Western contenders.

“Pick Me A Winner Bobby”

The two teams atop the West, the Utah Jazz (+850) and Phoenix Suns (+2000) both profile like classic regular season giants. The question of their playoff viability still lingers. Both teams have enjoyed unusually healthy seasons that’s helped fuel their regular-season success. It’s important to remember that playoff basketball resembles a different sport when compared to the regular season.

In a seven-game series, where defenses rise to another level, who do you trust? Utah choked away a 3-1 advantage over Denver last year. Meanwhile, Phoenix fields a team of playoff neophytes and Chris Paul, who despite being the Point God, owns some playoff gaffs on his resumé.

In terms of value, Denver (+1600 NBA title, +850 to win the West) looks like a strong choice. Their acquisition of Aaron Gordon at the trade deadline has supercharged their roster and given Nikola Jokic a ridiculously athletic and canny cutter to feed. Gordon also represents an improved perimeter stopper over Jerami Grant who left for Detroit. The foursome of Jokic, Jamal Murray, Aaron Gordon, and Michael Porter Jr. appears primed to shock the world.