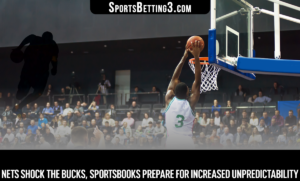 In the largest upset in 27 years, a depleted Brooklyn Nets team (+1225) defeated the Milwaukee Bucks on Wednesday. The Bucks blunder is the third-largest upset in NBA history, showing the NBA Bubble to be even more unpredictable than initially anticipated.

Sportsbooks are taking notice as well. After opening up as +650 the Celtics have dropped down to +500 to win the Eastern Conference. Further, the Raptors opened the Bubble at +700. Since their win over the Lakers on Saturday, odds have swung drastically down to +400.

The unpredictability that the Bubble brings on lends many of us to question how to capitalize on such a turbulent NBA season.

The Raptors and Celtics Are a Problem

The Raptors are getting a ton of love from fans after winning last year’s NBA Championship. Just prior to the Bubble’s inception, the Raptors were one of the most bet on teams to win the title. Sportsbooks are clearly trying to hedge their bets in the East in fear that the Bucks will not succeed to advance to the finals. This draws eerie comparisons to LeBron James during his first stint in Cleveland. The Cavaliers were constant favorites to win the East and Finals. Not only did they not win a title until 2016, but they only made the finals once in LeBron’s first 7 years in the league. It is important to note that Giannis has more talent to work with than James did with the Cavs during the 2000s. However, the salient point remains that Giannis does not have the same roster that the Celtics or Raptors do.

A huge factor in these odds is the Point Guard situation in Boston. Kemba Walker has been on a minutes restriction for several games. Furthermore, Boston does not have anyone near the caliber of Walker behind him. When Kyrie Irving went down with injuries, Terry Rozier would fill in amicably. Rozier is now in Charlotte and their other guard Marcus Smart can be found as their 6th man for defense and hustle. He is hardly someone that is able to run the offense. Tatum is not ready to carry this team to a finals appearance without Walker so his health will be crucial.

Do We Really Want to Fade The Bucks?

The short answer to this is yes. The Bucks’ odds have not changed on any books since the Raptors and Celtics took a nosedive. Sportsbooks must do their absolute best to limit their financial risk. Other books are currently offering fantastic odds on the Celtics and Raptors to win the East. These would be the two most likely to supersede Giannis and the Bucks. For those looking to bet on the 76ers to win the East, move your money elsewhere. The Bucks are a horrendous matchup for them so unless the 76ers are somehow able to avoid them, there will not be a title in Philadelphia this year. Overall, there is a lot of value in Boston and Toronto depending on the sportsbook you use. Likewise, the unpredictability from the NBA Bubble has sportsbooks terrified of the repercussions, which should make bettors salivate… Expect the unexpected