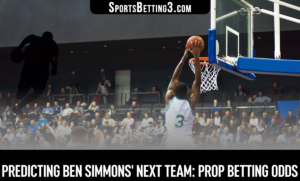 We are now less than a week out from training camp opening for all NBA teams. Teams will finally have a chance to showcase their newly built rosters in hopes of landing a NBA title. It’s typically an exciting time of year for most teams. However, it’ll be anything but that for the Philadelphia 76ers; who are in the midst of dealing with the Ben Simmons trade saga. We’ve seen reports fly around but it seems like the common consensus is that Simmons will be absent in training camp.

A lot of has transpired to get to this point for both Ben Simmons and the Philadelphia 76ers. A failed trade for James Harden, the infamous pass out of a wide open dunk from Simmons, along with postgame comments from both head coach Doc Rivers and star Joel Embiid have fueled that the fire that has led to Simmons ultimately wanting out.

The Odds for Ben Simmons’ next team:

While we don’t know exactly when a trade will materialize, we can make some educated predictions into where Simmons might land in a trade. BetMGM recently published odds on which teams have the best chance on landing the versatile forward:

The Minnesota Timberwolves have jumped up to be the favorite, and with good reason. They’ve reportedly been the most active team in trade talks for Simmons and have shown consistent interest. Simmons’ fit alongside Karl-Anthony Towns, one of the best shooting big men in NBA history, is textbook. The main roadblock to any potential Simmons-to-Minnesota deal mainly lies with what the Timberwolves are willing to offer. Karl-Anthony Towns and Anthony Edwards have been placed off the trading block, and Minnesota is reportedly not even willing to include D’Angelo Russell.

The Timberwolves’ offer would likely surround Malik Beasley, a really solid player, and Jaden McDaniels who is still very young. The Sixers aren’t a rebuilding team by any means, as they have a MVP candidate in Joel Embiid in the midst of his prime. While Beasley and McDaniels are solid players, they aren’t moving the needle for Philadelphia — and neither would draft picks immediately.

The Timberwolves are a very safe bet for some of the reasons I’ve listed above, and I frankly don’t blame you if slam the “bet” button on their name. However, I have an option for some of the risk takers out there: look into Toronto or Portland as possible destinations.

My reasoning behind this? The Sixers are reportedly valuing win-now players and assets in a pursuit for a NBA title. Toronto and Portland are home to a wide selection of good talent that could help the Sixers right now in a potential deal. The Raptors have players such as Fred VanVleet, Pascal Siakam, and OG Anunoby that they could put into a trade. They’ve also shown a recent willingness to go younger, as Kyle Lowry and Norman Powell have departed the franchise in recent memory.

Portland makes a ton of sense as well. While Philly would love nothing more than a Damian Lillard deal it’s simply unrealistic as of right. What Portland could offer is Dame’s running mate, CJ McCollum — who is a very capable and solid player. Portland also has win-now talent throughout the roster with Robert Covington and Norman Powell, just to name a few.

If Ben Simmons isn’t getting shipped to Minnesota, I’d expect that it would likely be one of those two outside teams involved in a deal. This situation is far from solved, and I’d expect things to get much uglier between Ben Simmons and the Sixers in the coming weeks, which might just tip the iceberg on a potential Ben Simmons deal.