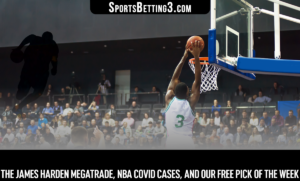 It finally happened. The long-awaited James Harden trade that everyone knew was going to happen is complete. Ultimately, Harden got his wish; he headed to Brooklyn to form a terrifying trio with Kevin Durant and Kyrie Irving. While everyone knew that Brooklyn was Harden’s number one destination, no one could figure out how Brooklyn’s meager trade assets could net one of the most explosive offensive players in league history. In other NBA news, Covid cases rise on numerous teams and multiple games have been delayed due to lack of available players. Here’s your NBA roundup plus a free pick of the week!

How The Harden Trade Went Down

It took four teams, the outside counsel of Wasserman agents, Jason Ranne and Chafie Fields, along with a boatload of draft picks for Brooklyn to seal their second league MVP. What’s surprising is the Rockets ended up settling for essentially all of Brooklyn’s draft for the next seven years, as well as Victor Oladipo, Rodions Kurucs, and Dante Exum. Four of those draft picks are draft swaps which means Houston will get Brooklyn’s pick if it ends up better than their own. They’ll be hoping that Oladipo can return to his form of a few years ago before his ruptured quad.

At the outset of the Harden trade saga, it was widely believed that Houston would only accept a surefire all-star along with considerable draft compensation. To end up with two rotation players, picks, and yet another player coming off a major injury looks like a long fall from grace. Perhaps Harden’s recent comments about the team pushed the organization to move on.

“We’re not even close, honestly, to that team — obviously the defending champions — and all the other elite teams out there,” Harden said. I mean, you can tell the difference in these last two games. We’re just not good enough — chemistry, talentwise, just everything. And it was clear these last two games.” If those comments spurred the team on, they may ultimately regret not taking more time to try and secure Ben Simmons. Reports are Houston wanted Simmons, rookie Tyrese Maxey, along with draft picks. Time will tell if any of those draft picks reap a player of Simmons’ caliber.

Last year the NBA instituted an unprecedented bubble league to finish the 2019-2020 season. Despite the isolation format succeeding wildly, players and owners opted not to use the format again. Players were against it due to the difficult toll it entailed, keeping them away from family and friends for over two months. Owners went along with it, hoping a vaccine and social distancing would allow for fans in the stands and comparably increased revenue in contrast to the fanless bubble league.

Now five games from the first 23 days of the season have been postponed due to Covid concerns. NBA officials did build in extra time for this exact scenario. Nevertheless, there is increased anxiety around the league with cases rising. As Stan Van Gundy said, “I know it’s cliché, but in this year, it’s absolutely true: It is literally one day at a time.”

Free Pick Of The Week

Tomorrow night the Denver Nuggets take on the Golden State Warriors. After some early-season struggles, the Warriors are starting to look like the Warriors again. Meanwhile, the Nuggets are still scuffling to replace lost players and the absence of Michael Porter Jr. due to Covid. Take the Dubs +5 for your free pick of the week.