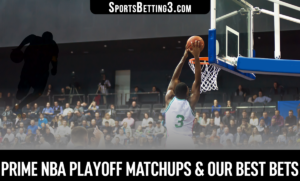 Spring has arrived and that means so too, have the NBA playoffs. This year we revert to the norm, throwing out the isolation bubble in favor of real arenas, travel, and fans. The NBA season saw unprecedented amounts of injuries and absences, which led to some atypical playoff matchups. At the beginning of the year, no one would have predicted that the Phoenix Suns would finish second in the West, or that the Boston Celtics would fall to seventh in the East. Such variance from the conventional wisdom gives NBA fans some enticing clashes in round 1. Here’s our breakdown of the most intriguing series of the NBA Playoffs and our best bets.

A rematch of last year’s battle in the bubble that saw Miami wipe the floor with Milwaukee. The Bucks crucially added Jrue Holiday precisely for encounters like these so he could take advantage of lesser defenders like Tyler Herro, Duncan Robinson, and Goran Dragic.

The Bucks also diversified their game plan, playing various defensive styles to avoid predictability come the playoffs. Even though Miami restored their offensive to elite levels the past 25 games, Milwaukee looks ready to right their wrongs of playoff pasts.

Undoubtedly, the most surprising matchup of round 1. Endless Laker injuries and fortuitous Phoenix health led to the Suns’ nightmare matchup. Still, they own more than a puncher’s chance against the ailing defending champs. Size often matters in the NBA and the Lakers almost comically dwarf the Suns.

Unfortunately, for Phoenix, goading Los Angeles into playing small ball only unleashes their deadliest lineup with Anthony Davis at center and Lebron James at power forward. Those lineups are +25 per 100 possessions and rank in the 99% in both offense and defense according to Ben Falk.

The Lakers also enjoy four tough defenders, Alex Caruso, Kentavious Caldwell-Pope, Wes Mattews, and Dennis Schroder to throw at Phoenix’s best two players: Devin Booker and Chris Paul. Even in the face of all those disadvantages, the Suns are no pushover.

Another rematch of last year’s bubble brawls, in which the Mavs gave the Clippers fits even without Kristapas Porzingas. Regrettably, it sounds like both Porzingas and Maxi Kliber, Dallas’ key cog defensively, are banged up. At least they are slated to play and hopefully stay healthy enough to offer us a great series.

If Dallas was completely healthy, this looks like an engaging upset possibility. Luka Doncic, the Slovenian Sensation, eviscerates any and all defenses that come his way. Lamentably the rest of Dallas doesn’t look quite ready to shock the world.

If Jamal Murray hadn’t torn his knee, the Nuggets would be a legitimate championship contender. However, they still retain Michael Porter Jr. waiting in the wings for his big moment. Probably unknown to the average sports fan, Porter’s a 6’11’’ baby Durant with nearly unlimited range. For Denver to pull off this minor upset, they need Porter to go “Flame on!” and torch the smaller Portland defenders as Nicola Jokic continues to wield the orb of power as the presumptive MVP.

Portland suffered from a cavalcade of injuries and they did so with little fanfare. But now they’re healthy, whole, and reserve a stockpile of dangerous lineups. Lillard continues to terrify teams as much as any guard not named Curry and C.J McCollum remains a steady running mate. We’re betting on Jokic to continue his warpath against Portland.

This series headline reads like “Grit Vs. Gifts.” The New York Knicks embody grit and guts under tenacious head coach Tom Thibodeau. Their best player, Julius Randle rose from the ashes of unfulfilled expectations this year and looks like a shoe-in for the most improved player award.

On the other hand, the Atlanta Hawks turned their act around after firing ex-head coach Lloyd Pierce. On the heels of their free agency splurge, the Hawks righted the ship around their talented roster of shooters. In the three games between these two teams, Randle decimated the Hawks and we expect that to continue.