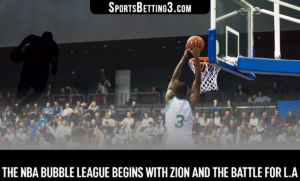 After months of uncertainty, the NBA returns with two marquee games on TNT to kick-off the Bubble League. The Utah Jazz (+2.5 / -110) take on Zion Williamson and the New Orleans Pelicans before Western Contenders Los Angeles Lakers (-4.5 / -110) and Clippers square off for a possible playoff preview.

Isolated in the “happiest place on earth,” the 8 game seeding schedule was selected based on each team’s remaining regular-season schedule. After the 8 games, the top 7 seeds are locked into their playoff spots while the 8th and 9th seeds could enter a play-in series, provided the 9th seed is within 4 games of the 8th seed.

It’s slightly complicated but essentially the 8 game schedule determines the playoff seedings. In the case that the 8th and 9th place teams are close, a play-in series would ensue.

Who’s Got The Hardest Schedule?

Parsing out who got the short end of the scheduling stick isn’t easy. Thankfully, John Schuhmann of NBA.com tweeted the strength of schedule based on opponents’ winning percentage. However, if that looks like Sanskrit to you, here are the schedule rankings from hardest to easiest with their over-under totals for the 8 game seeding schedule:

Comparing their old schedule to their new one, the Lakers, Miami, Toronto, Portland, and Houston saw their road become more difficult.

The NBA’s Bubble League sees nearly as much uncertainty as the rest of us. Most recently 6th man extraordinaire, Lou Williams, got into hot water, or hot wings, over his unsanctioned visit to an Orlando gentlemen’s club. In his defense, the establishment offers “Louwill Lemon Pepper BBQ.”

As hilarious as Williams’ strip club visit was, it does underscore the uncertainty of NBA rosters in the Bubble League. Already a number of key players for teams with championship aspirations have declined to play. Here are a few key injuries and absences.

The defensive ace opted out due to his son’s history of respiratory illnesses. Bradley served as the team’s best on-ball defender and dependable floor spacer. Replacing Bradley with J.R Smith and Deion Waiters should worry fans of the lake show.

Not that the Nets were ever contenders but losing Dinwiddie turns them into a borderline lottery team.

The Spurs star opted for knee surgery and will be out until next year.

The return of Victor Oladipo cushions the blow for Indiana losing one of their top big men. Sabonis left the Bubble for an opinion on his foot injury.