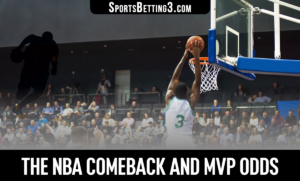 Obviously, everything, not just sports, is up in the air during this insane coronavirus time. Thankfully, one league, the NBA, is attempting to come to our pandemic rescue and play actual games. Currently, the odds for the Association returning are -300 that they will play and +200 that this will blow up in their faces. On July 8th, Adam Silver expressed concern about the recent spate of infections among players arriving in Orlando for the “bubble league.”

NBA: To Play Or Not To Play

Silver also announced the possibility of another shutdown if infections increase despite the many safeguards in place for players and staff. That leads to the $100,000 question. Will the NBA finish the season in its current format. YES stands at -250 while the NO is +170. Handicapping the line for gamblers remains elusive as no one knows how many tests would constitute the “significant spread” that Silver stated could shut down the league.

The Summer Of NBA Player Discontent

Lillard told reporters that, “My confidence ain’t great because you’re telling me you’re gonna have 22 teams full of players following all the rules? When we have 100 percent freedom, everybody don’t follow all the rules. I don’t have much confidence. But, hopefully, it’ll be handled to a point where we’re not putting everybody at risk or in a dangerous position.”

Embiid never scared to throw in his two cents said, “I don’t think it’s going to be safe enough.” If the NBA does make its much-needed return, typical NBA storylines are thrown a coronavirus curveball.

How Does The Shut Down Effect MVP Odds?

For instance, what happens to the MVP race? Lebron James had just ripped off an impressive run of stellar play prior to the shutdown, while Giannis Antetokounmpo’s run was stalled by a sprained knee. As of now, Giannis remains the heavy favorite at -3500 with Lebron second at +650. It would seem impossible for anyone else to play themselves into the race.

For now, all we can do is hope the NBA comes back and saves us all from cabin fever.