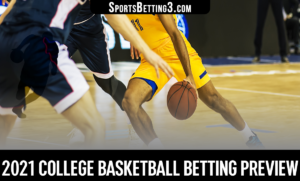 Among the sports casualties of 2020, March Madness ranks right at the top. For the first year in living memory, sports fans were deprived of Bill Rafferty screaming “Onions!! Double order” or “Lingerie on the deck!” However, the NCAA, after careful consideration of how much money they would lose, has decided to go forward with a slightly shortened college basketball season. The NCAA is aiming for a shortened 27 game schedule but, of course, it’s all dependent on factors far beyond basketball. Nevertheless, here’s our season preview of top teams and players to watch for.

For the first time since 2012, Duke starts the season outside the AP top 5. It’s also the first time since 2005 that North Carolina failed to begin the season among the AP top 15. The lack of a top dog should make for a wild and erratic finish. Roy Williams comes off his worst season as the Tar Heel head coach with 3 five star recruits and the returning muscle of Garrison Brooks.

However, Florida State has quietly been building a basketball powerhouse down in Tallahassee and this year looks like their year to upset the blue blood apple cart. 6’9” freshmen five-star point guard Scottie Barnes joins an already lengthy roster of studs. FSU +300 to win the ACC

Wooden Award favorite Luka Garza (+400) looks to take little old Iowa to the promised land, although he’ll have to go through maybe the best conference in basketball to do so. Meanwhile, tried and true Wisconsin returns five seniors that matter and gets Micah Potter for the whole season. Garza may get the publicity but Wisconsin is our bet to take the Big Ten title. Wisconsin +350

West coast basketball looks to make a return to prominence after a few years of uncharacteristic obscurity. Arizona, Oregon, and Arizona State all made the AP top 25 and NBA prospects like Zaire Williams and Joshua Christopher add some freshmen pizazz to the party. UCLA under Mick Cronin got off to a rocky start last year but remain the favorites, thanks to Kentucky transfer Johnny Juzang and four-star freshman guard Jaylen Clark.

However, we like what Bobby Hurley has put together in the desert with senior guard Remy Martin and highly touted recruits Josh Christopher and Marcus Bagley. We’re going Sun Devils at +265, although Oregon’s a nice value at +425.

Player Of The Year

As we mentioned, Iowa senior Luka Garza fits the Tyler Hansbrough mold to a tee and enters the year as the heavy odds-on favorite for POY. Nonetheless, here are some other names to keep an eye on. Cade Cunningham (+1500) of Oklahoma State has NBA scouts drooling and should put up monster numbers in the Big 12.

Jared Butler (+600) of Baylor is the best player on the best team in the Big 12 and that’s usually a pretty good recipe for success. Of course, a POY conversation wouldn’t be complete without a Kentucky rookie. This year’s Diaper Dandy of the south is BJ Boston(+20000), a 6’7” forward who scores with ease.
Photo Credit