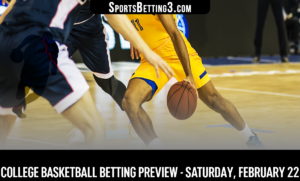 Selection Sunday is coming up on March 15, so this upcoming weekend marks the first of four weekends before the brackets are set. Below we’ll go over the three biggest games of the day featuring ranked-on-ranked match ups for our college basketball Saturday betting preview.

The Saturday college basketball slate delivers its marquee match up right out of the gate as #3 Kansas heads to #1 Baylor. The Baylor Bears have a home court advantage worth 3.4 points according to KenPom, which ranks 105th in the country. While their home court isn’t as impressive as many top programs, the Bears haven’t lost a game since November 8 in a 3-point loss to Washington on a neutral court. Kansas has three losses on their record, but to three teams much better than Washington as they have lost to Duke on a neutral court, to Villanova on the road, and to Baylor at home in a 12-point loss on January 11.

KenPom is projecting this game as a one-point victory for Baylor, by the score of 64-63. Baylor will have to travel to Oklahoma on Tuesday night, while Kansas will enter this game with an extra day of rest having beaten Iowa State at home, 91-71 on Monday. Neither team has a true weakness, as Kansas ranks #10 on offense, and #1 on defense in the country per adjusted efficiency. Baylor, meanwhile, ranks #3 on offense and #25 on defense. Looking just at conference play, Kansas has the #1 offense while Baylor has the #1 defense. On the other end of the court, Baylor ranks #3 on offense against Kansas at #2 on defense.

While Oregon enters this game ranked ten spots above Arizona in the AP poll, KenPom has the Ducks at #25 and Arizona ranked #13 in the country. It’s no surprise, then, that KenPom is projecting a five-point victory for Arizona on Saturday night. Arizona’s home court is reportedly worth 3.5 points to the spread. If this line comes out at Arizona -5, the public may see the higher ranked team getting more than the standard 3-4 points for home court and jump on Oregon. If so, and this line gets pushed down closer to Arizona -3, there may be some value on the Wildcats. Arizona does have a game on Thursday night, but it’s at home against a lackluster Oregon State team. Oregon also has to play on Thursday night, and will be traveling to Arizona State.

This game will match up the #2 offense in the Pac-12 in Oregon, against the #3 defense in the conference in Arizona. On the other end of the court, Arizona ranks #3 on offense in conference play, while Oregon ranks #7 on defense.

The final ranked-on-ranked game of the day takes place in the West Coast Conference as the top two teams in the league are pitted against each other in Provo, Utah. Gonzaga has lost just once this year on a neutral court to Michigan, and they are expected to take care of business despite being on the road to a legitimate top-25 team.

KenPom is projecting this one as a two-point win for the Zags, 82-80. The game should certainly be high scoring, as Gonzaga has the #1 offense in adjusted efficiency, while BYU is sporting the #5 offense in the country. Gonzaga gets the edge on defense though, as they are rated #1 on both offense and defense in conference play.