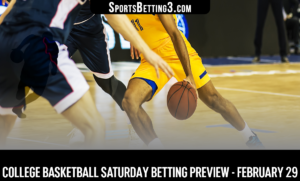 Projected brackets are beginning to take shape, but there’s still plenty of time for teams to improve their seeds. Below we’ll go over the three biggest games coming up this weekend featuring ranked on ranked action for our college basketball Saturday betting preview.

The Big Ten is absolutely loaded this year, and it’s been nearly impossible to tell who the best team in the league is on any given day. Penn State had been surging in conference play, winning eight straight conference games dating from January 15 to February 18. But they’ve faltered in their last two games, losing 62-56 hosting Illinois and losing 68-60 at Indiana.

Iowa has been up and down as well during Big Ten play. From January 10 to January 27 they went on a five game winning streak, including wins over Michigan, Wisconsin, Rutgers, and Maryland. Only one of those five wins was on the road, however, in a much less impressive win at Northwestern. But Iowa has not lost a home game since November 11, in a surprising 93-78 loss hosting DePaul.

With Iowa at home in this one, KenPom is projecting a 3-point Hawkeyes win, 78-75. While it seems smart to buy low on a Penn State team coming off two losses, Iowa’s record at home is frightening to fade. Iowa gets the job done with the #5 ranked offense in the country per adjusted efficiency. But Penn State will combat that with the #16 defense. On offense, Penn State is no slouch either, ranking #36 in the country. The Nittany Lions do not turn the ball over often, and Iowa is poor at turning over their opponents.

While Auburn and Kentucky are technically both ranked in the top 15, KenPom has neither team in the top 25. Auburn slots in at #38 according to KenPom, while Kentucky is #26.

When looking at how these two teams match up, there is no obvious edge when Auburn has the ball, with their #37 offense going up against Kentucky’s #40 ranked defense. But on the other end of the court, Kentucky will be running with the #31 offense, against Auburn’s #64 defense.

Kentucky is also excellent at defending the perimeter on defense, while Auburn is one of the worst teams in the country in 3-point shooting at 30.3% on the year. Kentucky is also ranked #13 in block percentage on defense, and Auburn is susceptible to blocked shots on offense, allowing 9.4 blocks per game. Finally, Kentucky also has a massive edge in free throw shooting, as they have the 6th best free throw shooting percentage in the country at 79.1% compared to Auburn at 67.3%.

KenPom is projecting a 5-point win for Kentucky, and even that number seems light when considering the edges Kentucky has on both sides of the ball, along with their home court which is worth a reported 4-points to the spread.

While Michigan State has just recently crawled back into the top 25, the advanced metrics still have them listed as one of the top ten teams in the country. Maryland’s position on the national stage is equally as up for debate. KenPom lists them as the #8 team in the country, while BartTorvik.com has them at #19. It’s not surprising then, that BartTorvik projects this as a narrow one-point win for Maryland, 69-68, while KenPom has Maryland winning 70-67.

This game will be a true test of strength on strength on both sides of the court. MSU and Maryland are well-balanced, and ranked top-30 on both sides of the ball. The edges show up in the turnover percentage and blocked shot percentage. Maryland is one of the best teams in the country at projecting the ball, while Michigan State struggles to get takeaways. But Michigan State excels at blocking shots on defense, while Maryland allows 11 blocked shots per game.

The two teams are also nearly identical in free-throw percentage, with MSU shooting 74.9% to Maryland at 74.7%. In a game that looks so devoid of edges, Maryland’s home court may be the trump card. Maryland has not lost at home yet this season, and their home-court advantage of 3.9 points is ranked 38th in the country. If this line opens with Maryland minus anything below 3-points, there might be some value on the Terrapins.