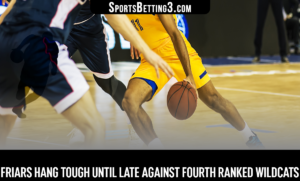 Philadelphia, 2/13/10 – Perhaps their coach inspired them pre-game with a surprise reading of The Little Engine That Could, or maybe Villanova was sleepwalking for most of the night. Either way, Providence, who count victories against UConn & Rutgers amongst their 12 wins (12-13 so far this campaign) showed they can play the David role to another’s team Goliath, at least to a certain point. That point was eight minutes left in the game, after which -Nova woke up/cut story time short, & finished strong to win 92-81.

Despite a laudable 22-2 overall record, Villanova has been slouching toward bad habits in their last several games. Bolstered by talented guard Scottie Reynolds, the Wildcats have evinced a sloppy style of play, frequently letting less than able competition hang around, when a good team would just be putting them down for the count with vigor. Even their coach admits as much.

“I don’t want it to always be, Scottie will get us going,” coach Jay Wright said. “But I’m glad we have that. That’s something I always have in the back of my mind.”

As per usual, Reynolds did not disappoint. It was his play, around that eight minutes left mark, that sealed the game for the -Cats. Reynolds went strong to the basket & mixed things up with Friars player Sharaud Curry, who took exception to the situation. Assessed a personal foul for the tangle with Reynolds & a technical foul for his subsequent jawing at the refs, Curry fouled out. Reynolds then hit three of the four shots he was awarded, keying a Villanova run on his way to 22 points. Joining him in leading the charge were Corey Fisher – also notching 22, and Antonio Pena, who turned in a dominating performance from the forward’s position, with 15 points, 12 boards, & 2 blocks.

The Fri-guys played hard, but ultimately aren’t built to contend against a team that will probably go deep into March’s Tournament. The aforementioned Curry put in 19 points, but maybe cost his team the win with his hot-tempered reaction. Providence coach Keno Davis disagreed.

“The explanation I got for the technical foul was, he said, ‘Where’s the foul?”‘ coach Keno Davis said.” He put his arms somewhat up. It’s about as demonstrative as Curry has ever been and that’s not very demonstrative.”

Jamine Peterson, who’s been a bright light for Providence all year, scored 19 as well. The true surprise was Vincent Council, who more than doubled his season average of 9.5/per game to 21 points against the Wildcats.

With Villanova facing more Tournament ready opposition soon, you would hope this match would serve to shock them from recent complacency. However, sometimes the problem with being good – or really good, as any team with two losses could be considered – is to be contemptuous of your competition, usually to your own peril.