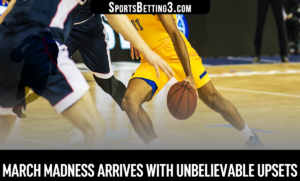 Every sports fan in America eagerly awaited March Madness and through the first week, college basketball did not disappoint. The opening weekend of the NCAA tournament saw the most upsets in the history of March Madness! 12 underdogs that won ranked at least 5 seeds below their opponents, shocking the world and epitomizing what March Madness is all about.

Among the multitude of Cinderella candidates, Oral Roberts best fits the bill. The 15th seed squeaked out wins against Ohio State and Florida to punch their ticket to the Sweet 16. Oregon State, Syracuse, and UCLA joined Oral Roberts as double digits seeds to make the second weekend. Overall, 10 different conferences are represented in the Sweet 16, falling one shy of tying the all-time record!

The Big 10 Goes Down Hard

All season long the Big 10 proclaimed their superiority over the rest of college basketball. However, when it came to tournament time, they fell apart. Of the record nine Big 10 teams that made the big dance, only Michigan remains. The Wolverines (-3) must carry the torch for the Midwest against one of the most athletic and defensive-minded teams from the ACC, Florida State. Juan Howard won’t be shocking the world this time around but look for Big Blue to advance.

On the flip side, the Pac 12 looked like the forgotten power conference throughout the year. In March, they’ve been giant killers with the USC Mobley brothers leading the charge. The Trojans (-2) take on conference rival, Oregon, in a true toss-up game. Still, you have to like the chances of the presumptive top 3 NBA draft pick, Evan Mobley.

For Oregon State, they take on Loyola Chicago (-6) and the meme queen Sister Jean. The Ramblers dissected top seed Illinois and retained a number of the players from their final four run two years ago. It’s hard to imagine the Beavers taking down this veteran-laden Loyola Chicago squad.

Despite the Big 10 and ACC soaking up most of the regular season headlines, the two best teams all year have inarguably been Gonzaga and Baylor. Through the first weekend, nothing happened to diminish the dominance of those two powerhouses. All four of their games were decided by double figures, proving that the Bulldogs and Bears stand head and shoulders above the competition.