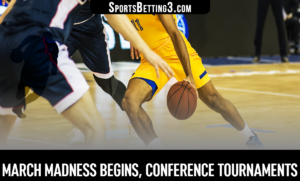 March has arrived and that means the Madness follows closely behind. After missing out on everyone’s favorite office pool sporting event last year, the NCAA returns in time for the work-from-home era. Pretending to work while gorging on hours of college basketball buzzer-beaters and shattered dreams has never been easier. This week conference tournaments commence, offering teams their last chance to make their bid for March Madness. Here’s our breakdown of who desperately needs to win to make the tournament and the teams to watch heading into the big dance.

The number one conference in America fields more top 10 teams than anyone else and two number 1 seeds in Illinois (+375) and Michigan (+175). Nevertheless, controversy continues as the top seeds bicker over who’s the rightful champion in this weird year.

Despite losing two of the last three, Michigan (14-3) cemented the Big 10 title thanks to their higher winning percentage .824. Of course, Illinois fans contend their 16-4 record should place them a half-game ahead of the Wolverines. We can only hope the two meet in Indianapolis to settle their beef on the court. If you’re looking for value, Iowa (+425) and Purdue (+500) look like your best bets.

Naturally, Mr. March, Tom Izzo wasn’t to be counted out despite a 4-9 league record on February 14. Since then Michigan State (+5000) rattled off huge wins against Michigan, Illinois, and Ohio State to greatly improve their March resumé. Still, a Spartan win over Maryland would finalize their NCAA berth.

Return Of The Big East

The halcyon days of Big East basketball might be in the rearview mirror. However, the once glorified conference looks to steal headlines at Madison Square Garden with perhaps the most intriguing conference tournament on the docket.

That leaves Dan Hurley’s UConn Huskies (+200) and recently returned guard James Bouknight as the newly installed favorites. The Huskies are undefeated ATS in their last four games and 15-5 ATS overall. Last but not least, Xavier, St. John’s, and Seton Hall sit squarely on the bubble and need a few wins to secure their ticket to March.

For the first time in recent memory, Duke (+8000) requires an ACC tournament title just to make it to March Madness. Krzyzewski and Co. look longer than long shots to make any noise just like fellow blue blood Kentucky.

Still, the ACC slots seven teams into the tournament with Virginia (+225) and Florida State (+260) leading the way. Another perennial powerhouse, Syracuse (+5000) could really use a few wins to ensure their NCAA tournament bid. The hottest team in the ACC, Georgia Tech (+1000) rides a six-game winning streak into the tournament but must overcome head coach Josh Pastner’s winless history in ACC tournament games.