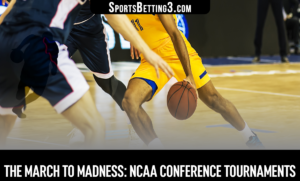 Duke needs a wildly impressive run in the ACC conference tournament to even sniff a chance at making it to March. Amazingly, Duke has reeled off a number of impressive wins after projected lottery pick Jalen Johnson opted out. For now, Virginia and Florida State stand atop the conference once considered head and shoulders above the rest. North Carolina could also use the tournament to improve their potential seeding. For now, Joe Lunardi has slotted the Heels at number 9.

By all accounts, the Big Ten stands a class above the rest of college basketball. Michigan and Ohio State are both ranked in the top 5. Below them, Iowa and Illinois both feature potential Wooden Award winners, Luka Garza and Ayo Dosunmu. Even after a win over the Fighting Illini, Michigan State will need a big push in the Big Ten conference tournament to continue their tradition of success in March. Fans of Indiana, Maryland, and Minnesota will be watching closely come conference tournament time. Currently, all three teeter between the play-in games and the last four in.

Behind Baylor, 7 other teams are making strong bids for March. West Virginia, Oklahoma, and Texas appear to be the best of the rest. As a part of the blue blood revival, Kansas has predictably righted the ship. For now, Lunardi has them pegged as a four seed on the rise. A strong run in the second strongest conference tournament could see them go even higher.

Here are some crucial games this weekend that could make or break teams heading into their conference tournaments:

UConn looks to be one of the first four out according to Lunardi. A big win at Villanova would go a long way towards improving their chances.

Kentucky still appears to be on the outside looking in. Winning at Tennessee would keep their very dim hopes of March alive.

These two teams are headed in opposite directions but both are assured tournament bids. This barnburner should tell us a lot about each team’s championship aspirations