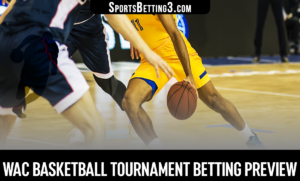 Conference tournament week is upon us, and with it comes a host of games from the afternoon until the morning hours, as teams across the country ecstatically punch tickets to the NCAA Tournament. The WAC is a conference that needs an automatic bid in order to win a trip to the big dance, so this tournament can make or break a team’s season. Below is a WAC basketball tournament betting preview with potential value plays throughout.

The tournament will tip off on Thursday, March 12 with four games.

Chicago State is the worst rated team per KenPom at #353 in the country. So it’s no surprise that they are projecting a blowout victor for the #1 seeded New Mexico State by a score of 82-54. New Mexico State is by far the highest rated team in the WAC, ranking #91 in Pomeroy’s rankings. If this line comes out at 18 points, it might be too light. Look for New Mexico State to be deservedly big favorites throughout the tournament.

Expect a much more competitive game from these two teams who split the season series with each team winning at home. KenPom is projecting a 70-68 victory for Kansas City. This game will feature a match up of strength on strength when Grand Canyon is on offense, and weakness on weakness when Kansas City is on offense. Kansas City is much more balanced than Grand Canyon and a line of two points may not be high enough.

Seattle comes into this game as the third highest rated team in the conference at #215 in the country. Cal Baptist is the second-highest ranked team but have been suspended from the postseason. Utah Valley is not far behind though, ranked #253 overall. KenPom is projecting a 73-71 victory for Seattle, but two points may not be enough of a spread in this one. Seattle boasts the #1 offense in the country at not turning the ball over and also has the 17th best free throw rate in the country at 77%.

Odds to Win the WAC Tournament

Seattle at +600 looks incredibly enticing. They lost to New Mexico State in both regular season games, but both games were within single digits as Seattle lost by eight each time. With that said, New Mexico State is clearly the best team in the conference, so even at -220 there may be a bit of value.