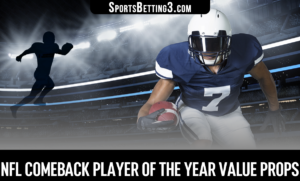 The NFL is determined to facilitate a 2020 season with or without fans in attendance. As we push forward to the new season and after reviewing MVP bets for the upcoming season, we switch over to another fan favorite. Comeback Player of the Year is one of the most popular preseason bets in the NFL. Players are getting into shape with Training Camp expected to begin July 28th. These familiar faces are heading back into the limelight after a long NFL offseason that put the season into jeopardy. Now that the season is upon us and the NFL is pushing forward we look to predicting who will turn their fortunes around this season, and overcome major adversity in their career…

In order to bet on this award, you must look back on past experiences. You can boil down the award winner by looking at these 3 criteria that players must fit in order to truly compete for the award…

Narrowing down the candidate to an offensive player is essential to distinguish. Only 3 of the last 20 Comeback Players of the Year have been defensive players. This staggering number makes it difficult to invest in a Derwin James (+2500) or JJ Watt (+700). As a result, the odds will favor three (offensive) candidates to win the NFL Comeback Player of the Year…

Will the Real Patriot Please Stand Up?

The 2015 MVP winner and one of the biggest stars in the league when the Panthers went 15-1, Cam is prepared to take over for a legend. Tom Brady is out and insert Cam Newton who teams up with coaching wizard Bill Belichick where he should be handed the starting QB role from the start. A steady decline since 2015 landed Cam on the free-agent market. However, many (including Patriots superfan Bill Simmons) have said his performance woes are both injury-related and a lack of surrounding talent. The surrounding offensive talent might not improve drastically but the coaching will. Expectation is that Belichick will change the way Cam plays and compete for the AFC East title again. This gives Cam the opportunity, along with the storyline to be a prime contender for the award. He is currently +325 consensus odds and fits every bit of the criteria listed above.

From a current New England Patriot to a former one, Rob Gronkowski retired before last season at the age of 29. Now a member of the Tampa Bay Buccanneers, Gronkowski teams up with an old friend, Tom Brady. The loaded Buccanneers offense put up the fourth-most points in the league in 2019, with a QB who threw 30 interceptions. Brady rarely turns the ball over and has more weapons at his disposal than he has had in years. Opportunity, storyline, and rapport with Brady make him a comeback candidate. Currently available at +700 across the board, Rob Gronkowski has plenty of value to steal the honor.

This one is a longshot considering the disdain that he has accrued since leaving the Steelers. The Associated Press votes on who gets this award. Antonio Brown did himself no favors in the eyes of the media so getting votes would require him to dominate if and when he does sign somewhere. Another former Patriot (for a game), Brown is practicing routes with Russell Wilson and Lamar Jackson weekly. Should he land in one of those spots the odds will swing dramatically in his favor. Available for +2200, Antonio Brown could post huge numbers to be an unbelievable story. If you are a Brown believer, take the odds fast before a contender gobbles him up and unleashes the beast.