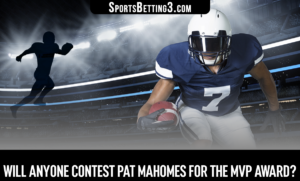 Patrick Mahomes has been paid as the greatest Quarterback of all time after only his third year. With one MVP in the bank and $500 million more coming, Mahomes will turn his attention to a childhood heroes record, Peyton Manning’s 5 MVP Awards…

The Covid-19 Pandemic had no effect on Pat Mahomes’ recently signed, a $502 million contract over 10 years, the largest contract in the history of sports. Mahomes’ second year in the league took the league by storm resulting in NFL MVP and Offensive Player of the Year honors. 2020 featured a crazy injury scare, a Super Bowl title, and a record-setting contract landing Pat Mahomes as the clear favorite to win the MVP award. Bettors should always be fishing for the best value while also looking at the most likely to win the bet. Furthermore, Quarterbacks will always get the benefit of the doubt from MVP voters making it wise to avoid other positions.  Over the last 13 seasons, there has only been one non-quarterback given the MVP award (Adrian Peterson).

Is There Value Elsewhere?

Aside from the 500 million dollar man, there are a host of other Quarterbacks to look at for the award. Carson Wentz (+2500) immediately jumps off the page as extremely valuable at the price. Wentz was well on his way to the MVP award in 2017 before tearing his ACL. Wentz has a strong arm and constantly escapes the pocket and hits receivers downfield. Doug Pederson is a great offensive coach and his protection should give him plenty of time to throw. Moreover, Pro Football Focus ranked his front five top in football in 2019. His offensive line should be back to full strength after several injuries derailed their 2020 season.

The trendy pick of 2020 is Kyler Murray (+1200), who is the former number 1 overall pick. This is reminiscent of Baker Mayfield being a favorite to win the 2019 MVP which did not end particularly well. However, Kyler Murray is very elusive and is able to add rushing yards to his resume whereas Mayfield is not. The addition of Deandre Hopkins will definitely help Murray breakout this season, how much is to be determined. Expect offensive mastermind, Kliff Kingsbury to have plenty of new plays to showcase their talents.