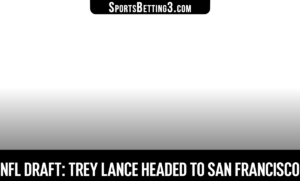 NFL Draft Thursday is typically chaotic — but not this chaotic. We have seen some Mac Jones drop from a -300 favorite to +150 to be drafted by the 49ers. Making Trey Lance the betting favorite according to every major sportsbook. From +240 odds last night to -160 odds by mid-day Thursday and dropping! Alas, Trey Lance and San Francisco are destined to work together for years on end.

Clearly, there have been leaks from the 49ers who may have been playing koi about their pick for weeks. Trey Lance is the most talented and highest upside player on their roster. Kyle Shanahan appears to have found his guy from North Dakota State.

NFL Futures are my favorite NFL bet to make. I bet on the Buccaneers to win the Super Bowl at +2800 last year. Now that it is draft time, NFL futures bets are not being talked about enough right now… Which means it is the perfect time to bet.

A running QB is always a plus when betting MVP. Murray knows how to slide, doesn’t take big hits, and the Cardinals are building around him. They don’t have much of a running game so I would say that Murray will have to put up huge numbers.

A longshot bet to say the very least. However, Hurts is an excellent runner and he can legitimately throw the ball. The Eagles need another offensive weapon which I expect them to take care of in the draft in some way. It is definitely worth a small sprinkle.

Offensive Rookie Of The Year

Here is a stat. 4 of the last 8 offensive rookies of the year are running backs. Since we expect Trey Lance to not start the year starting, that leaves just Trevor Lawrence and Zach Wilson has guaranteed starters at quarterback.

Thus, any running back that can grab a starting role immediately out of the gate is an excellent bet to win rookie of the year!

Alabama running back that many compare to Derek Henry. We have seen Henry flirt with NFL MVP honors, he would be my bet if he is given a serious role in an offense.

The Buffalo Bills have been linked to Etienne but they typically go by committee with Singleton and Moss. However, if he lands on a different roster with an opening, bet it immediately

Pro Football Focus says that Javonte Williams is the best running back in the draft. It is all about the landing spot, if it is a good spot, bet it.