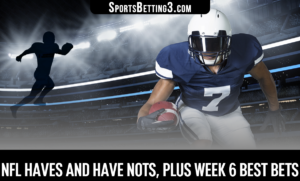 After an emotional week 5 in the National Football League, it’s time to take stock of all the happenings through roughly a quarter of NFL action. Covid has thrown some curveballs our way but thankfully, for now, it appears things have stabilized. The powers that be already announced that the Superbowl could happen as late as March to take into account any more virus-related setbacks.

Meanwhile, on the field, injuries have ravaged a few teams like the 49ers, Jets, and Giants. On the other hand, traditional powers like the Packers, Ravens, and Steelers look primed for a Superbowl run. With five weeks of data under our belt, it’s time to breakdown the haves and have nots, along with some tasty week 6 lines.

The Can’t Catch A Break Squads

Every year people warn about the Superbowl hangover for the losing team. While the 49ers look as enthusiastic as ever, the injury toll has laid this proud team low. Everyone from their best player, Nick Bosa to quarterback, Jimmy Garoppolo is either out or banged up.

Other notable 49er injuries include Richard Sherman, K’Waun Williams, and Dee Ford. The defense that was once a great strength has become a skeleton crew.

Their secondary made Ryan Fitzpatrick look like Joe Montana and chances are that will continue with Jared Goff and Co. coming to town. Until Vegas adjusts the Niners’ line or the Bay Area squad gets healthy, they remain a solid team to short.

As the Jets and Giants race to the bottom, their Moneyline calls out to gamblers everywhere. This week isn’t a slam dunk as Washington toggles between a lesser Allen and Alex Smith at QB. Nevertheless, it’s hard to see either New York team pulling out a win.

With either Joe Flaccid or Sam Darnold at the helm, the Jets are Jetsing in the classic sense of ineptitude. Concurrently, Danny Dimes can’t hold onto the ball and the prize of Trevor Laurence awaits the biggest loser.

TOMpa Bay continues to get respect despite a bad loss to the Bears and some key injuries up and down their roster. This week the Bucs face an uphill battle taking on Aaron Rodgers coming off a bye. Since taking over for Farve in 2008, Rodgers is 8-2-1 ATS, the best mark in the NFL.

The Vikings hold onto slim playoff hopes, thanks to their 1-4 start. However, almost all their losses came at the hands of good teams. It also helps that Kirk Cousins has found his Stephon Diggs replacement in rookie Justin Jefferson.

The only concerns with this matchup are Dalvin Cook’s injury and the fired coach bump from Atlanta. Still, the Falcons have looked terrible all year and the Vikings need this game.