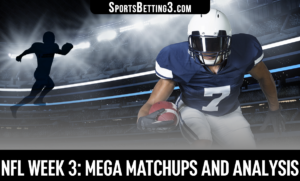 If week one of the NFL season brought some desperately needed action, the National Football League doubled down in week two and added a healthy portion of drama. The Dallas Cowboys overcame a 9 point deficit with just 3 minutes remaining while the Seattle Seahawks and New England Patriots went down to the wire on the one-yard line for the third consecutive contest. Dak Prescott’s late-game heroics gave him 15 game-winning drives since 2016, tying him with Drew Brews and, wait for it, Derek Carr!

In other news, Mahomes still owns the magic, as does Aaron Rodgers, and the Las Vegas Raiders might be for real. The over trend continues as 11 of the 16 games compiled the points. Look for oddsmakers to make a course correction by pushing those over lines even higher. However, as predicted here, defenses have struggled without the usual practice time and offenses are feasting. Thanks to this week’s matchups, the points are more than likely to continue.

The vaunted New England defense that put up historical numbers last season struggled against another above-average offense. Of course, Belichick defenses always improve as the year goes on. For now, the loss of basically all of their linebackers from a year ago has made run-stopping and setting the edge a problem. Defensive player of the year, Stephon Gilmore finally found his match against the D.K Metcalf and Russell Wilson’s moon balls.

This week they take on the new look Las Vegas Raiders and Jon Gruden. On paper, the Raiders match up well, riding a robust running attack and a QB with some experience under his belt. Nevertheless, without the dual-threat of Wilson, the Patriots defense won’t look so helpless. Patriots win but Raiders cover.

Dallas may have needed a legendary comeback to beat Atlanta but they still put up points despite opening the game with three straight turnovers. The Seahawks are currently 2nd in the league in scoring and 21st in points allowed. Without the ear-splitting 12th man to affect Dallas’ offense, look for the points to continue. However, Wilson’s on a heater and Dallas’ dreadful defense is sure to be picked apart. Seattle covers.

We finally get the matchup we all missed out on last year’s playoffs with the two most electric quarterbacks and the most recent MVPs squaring off. There’s plenty to dissect in this meeting but crucially, Patrick Mahomes is 10-2-1 ATS as underdogs and the over is 10-3 in those games! Baltimore currently ranks as the #1 defense but hasn’t seen anything like Mahomes and Co. The loss of CB Tavon Young will test Baltimore’s secondary. The Chiefs are a little banged up but ultimately, Mahomes as an underdog is too good to pass up. Kansas City plus 3.