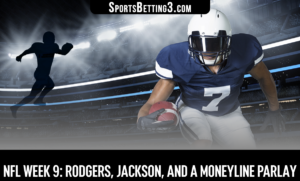 Week 8 of the NFL season proved to be the week of upsets. The Packers, Titans, Rams, and Panthers all fell to teams with only a handful of wins put together. Nevertheless, after 8 weeks gamblers have acquired a boatload of intel to decipher the cream of the crop from the dregs of the league. Shockingly, the New England Patriots appear littered among the detritus. As it turns out, Tom Brady’s pretty good and the loss of what little talent remained via opt-outs or injuries has laid low the once kings of the AFC East. Still, the idea of Bill Belichick losing to the Jets defies all reason.

Of course, Vegas keeps up with the Joneses. The lines for the Jets, Cowboys, and Giants, also known as the poopoo platter, have skyrocketed against decent competition. Nonetheless, there’s a few lines we like this week and moneyline parlays always offer the opportunity to bet against “Washington Generals” of the NFL.

For a few weeks, the Niners flew in the face of reason, taking a couple wins despite their medical tent of a roster. After they sustained even more injuries against the Seahawks and the Packers coming off a miserable loss to the Vikings, it’s difficult to see how this game will stay close. San Francisco even sees the writing on the wall, trading Kwon Alexander to the Saints on Monday.

If Belichick loses to the Jets, there will be a cavalcade of stories, theorizing how the G.O.A.T of coaches was propped up by the greatness of Tom Brady. It’s ridiculous but that’s how the media works. Whether he has to film Sam Darnold in his home or poison Adam Gase with a deflated football, there’s no way the Patriots lose to the Jets.

And obviously, the Steelers beat the anemic Cowboys. Although, it will probably be closer than anyone thinks since the Steelers will be thinking along those same lines. This no brainer nets 2.5 to 1. If you’re feeling really lucky, you can also throw the Kansas City Chiefs in that bet against the Carolina Panthers. Then you’re talking better than 5 to 1!

Lamar Jackson and the Ravens may disappoint against quality teams but they crush the average to bad ones. Yes, the Colts are 5-2 but their wins came against the Vikings, Jets, Bears, Bengals, and Lions. Not exactly murderer’s row and 2.5 is a small enough number that we like the Ravens to bounce back against Phil Rivers.