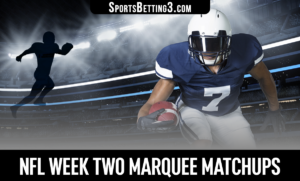 The National Football League returned and despite all the anticipation, week one did not disappoint. Tampa Bay looked old and out of sync in the bayou, the Patriots kept on patrioting, and the 49ers began their Superbowl hangover season with a loss to division rival Arizona. Every year, week one of the gridiron inspires a cavalcade of overreactions. Will the Cowboys explosive offense continue to look anemic? Is Tom Terrific washed up? Is Cam Newton the savior in New England? We cover all that and more in week two’s marquee matchups.

Undoubtedly, the biggest storyline going into this year’s NFL season was Tom Brady’s move to Tampa Bay. After completing the most illustrious quarterbacking career for a single franchise, TB12 wanted some offensive weaponry and a chance to put up some points.

Unfortunately, with the new toys of Chris Godwin and Mike Evans came 119 yards in penalties and a backbreaking turnover on a kickoff in the game’s final minutes. Mistakes like those never happened in New England.

On the bright side, it’s only one game against an NFC powerhouse and Brady is only going to get more in sync with his receivers. Look for the Buccaneers to stack the points in a very early must-win game.

Like clockwork, a Bill Belichick coached team methodically picked apart an overmatched division rival. The 21-11 score failed to show the dominance displayed by the new look Patriots. A few uncharacteristic errors, like fumbling out the endzone, kept the game closer than it should have been.

Now they take on an old foe with the biggest axe to grind. Unlike the Dolphins, Seattle has all the tools to slow Newton and New England’s running centric offense. However, it’s hard to bet against Belichick getting an extra point. We predict a low scoring affair.

America’s team finally fired Jason Garrett after 9 seasons of Cowboy fans pulling their hair out. Unfortunately, in week one of a new year they looked like the same old Cowboys. A killer controversial penalty in the game’s dying moments felt all too familiar. Still, there was plenty to like if you’re a Dallas fan.

Aldon Smith looked like an absolute beast up front and Cee Dee Lamb looked every bit the star wide receiver he was billed as. Looking forward to Atlanta, the points should come in bunches as both teams look to get back on track. Cowboys in a nailbiter.