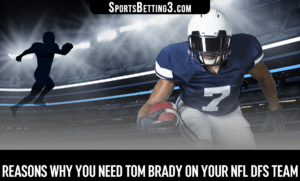 Every player on the NFL field has their role, and each role is equally important. But there’s nothing more important than the quarterback.  A good quarterback handles the reign of a team. That’s why many teams draft the best quarterback recruit every year, aiming to win both the regular season and Super Bowl.

Though many factors contribute to a team’s winning record, one thing is for sure: a great quarterback has a lot to do with it. The New England Patriots’ dynasty wouldn’t have been possible without Tom Brady. And that’s why Brady is considered one of the best quarterbacks of all-time.

So why should you consider getting him on your NFL DFS team? Let us count the ways.

When the pressure mounts, you need players at their best. Not everyone can rise to the occasion. Brady can deliver when it counts.

The score was tied at 17 when the Patriots faced the Rams in Super Bowl XXXVI. Patriots fans expected them to run an overtime play. Instead, Brady made a surprise move to setup Adam Vinatieri’s game-winning 48-yard field goal.

During the recent Super Bowl XLIX, Brady made one of the most significant plays of his career. In a matter of a few plays, he erased a 10-point deficit and put his team ahead 28-24. That makes Brady one of the greatest clutch players of all-time. Brady won’t flinch when the chips are down.

Nearly every Super Bowl appearance Brady has made becomes a historic event. Remember how he erased the 25-point Atlanta Falcons lead during the Super Bowl LI?

The Pats weren’t expected to be competitive against a much strong Falcons team. Ultimately, Brady finished with 43 passes for 62 attempts and 2 touchdowns.

If you don’t agree, we don’t know how else to convince you. If Brady isn’t the right candidate for your NFL DFS team, perhaps you should listen to some free fantasy sports advice to hear about other good prospects.

Brady doesn’t have the leg and arm strength of quarterbacks like Aaron Rodgers, Patrick Mahomes, and Russel Wilson. They can out muscle him any day of week. But what makes Brady different from these quarterbacks is his quick strategic thinking and field adaptability.

As per New England Patriots’ Coach Bill Belichick, Brady’s work ethic make him unique among the league’s quarterbacks. His ability to think strategically and position his team is unmatched.

A good quarterback needs to know – even memorize – all the plays. Even more important is the ability to call an audible when the coach’s call isn’t viable. Not every quarterback can do that. Brady can.

Brady has played football long enough to speak its language fluently. Almost without verbal communication, he knows how to lead his team and execute a game plan.

A critical reason for the success of the game’s greatest quarterbacks – think Peyton Manning, Drew Brees, or Brett Favre – is that they stick to consistent systems and coaching staff. That explains Brady’s long-term success with the Patriots. His massive knowledge base and accumulated experience should bode well as he continues playing with the Tampa Bay Buccaneers.

Without a doubt, few other quarterbacks rival Tom Brady. His clutch play, Super Bowl experience, strategic thinking and football knowledge are simply unmatched. Missing Brady in your NFL DFS team would be a mistake. A DFS team should consist of your dream team, and it must be a team that can win.